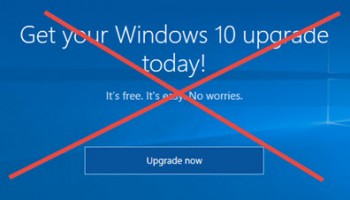 Rejoice, you Win 10 holdouts! Microsoft has released an update for Window 7 and Windows 8.1 that removes the Get Windows 10 (GWX) advertising App and other elements related to their underhanded tactics of prompting users to accept Windows 10 upgrades.

This is good news for those Windows 7 and Windows 8.1 holdouts who somehow managed to avoid Microsoft’s aggressive and deceitful push of the Windows 10 operating system on millions of computers worldwide.

The main purpose of the wicked so-called Get Windows 10 “patch” was to help Microsoft achieve their goal of 1 billion users by the year 2018. The controversial App was designed to incessantly stick pop-ups in your face promoting the Windows 10 upgrade. And if that didn’t work, it would sometimes install Windows 10 in the background, even if you tried to dismiss the pop-up with the intention of avoiding the upgrade.

Even though Windows 10 has been adopted (or imposed, in some cases) more rapidly than previous versions of Windows, Microsoft has admitted they’re not likely to achieve their goal by 2018. For one thing, Microsoft had originally expected a significant boost in the numbers from selling 50 million Windows phones a year, but a series of missteps has seen sales of Windows phones essentially collapse. Oops.

With that reality sticking in their butt like a needle from a desert cactus, it appears that Microsoft has recognized that adding individual users to the list of newcomers to Windows 10 is the slow road to achieving massive upgrade migration. At this point, the fastest route appears to be enterprise computers. Getting one large company on board could mean hundreds of thousands of computers at a time upgrading to the latest Windows.

So, the little guy is finally off the hook. We holdouts can finally install the latest Windows Update patches without fear of getting infected by Windows 10. Hallelujah!

Even though the GWX App remains deployed on untold numbers of older Windows computers, the advertising push has been largely silenced. According to Microsoft, the new KB3184143 update “removes the GWX App and other software related to the free upgrade offer.”

While Microsoft’s forceful tactics may have been successful in boosting the number of new users of Windows 10 (over 350 million by last count), it certainly didn’t earn them any new friends. The amount of damage to the brand as an effect of their ill-gotten gains has yet to be determined.

The offer to get the free Windows 10 upgrade ended on July 29th. For people who claim they are using assistive technologies, true or not, Microsoft is still offering free Windows 10 upgrades without the full Windows 10 license. That means you can install and use Windows 10 now, but if you move to a new computer, you’ll have to buy Windows 10, or perhaps use the same free upgrade link again, if it remains available.

For a complete list of the software removed by this Windows Update, see the update replacement information.

The KB3184143 update uninstalls the following updates on Windows 7/8.1 computers to remove the Get Windows 10 App and other upgrade offer-related components:

While the GWX App updates were released as “important” or “recommended”, this new update is being released as optional. You will need to review the list of available updates in the Windows Update program to manually select the KB3184143 update for installation. I suppose there is no reason to consider it an important update because computers will continue to function properly whether or not GWX is uninstalled, but in my view, the update should at least be labeled as “recommended”.

The “remove GWX” update may be one of Windows’ most popular updates in a long time. What do you think?

7 thoughts on “Windows 10 Nagware Is Being Removed”