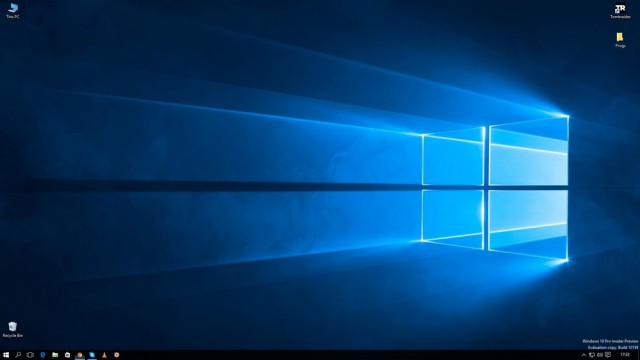 I would hate to be remembered as that Limey English Pom who spent all his waking hours slagging off Windows and anything else that slinks out of Redmond. Sure, I’m the one who wrote about how much Windows 8 sucks and how Windows 10 is dumbing us all down, but that doesn’t make me a whinging pom, does it? Either way, whether we like it or not, Microsoft is launching a streamlined greyhound of an operating system at the end of this month and you know what they say about whippets and greyhounds don’t you? That’s right, they haven’t got an ounce of fat on them, which is why they can run so fast. And Windows 10 is fast, make no mistake!

Faster than a ferret up a drainpipe!

Windows 10 boots up several times faster than previous versions of Windows and although the builds I’m testing (10159 and 10162) are both clean (not upgrades) and recent installs with only a handful of other programs installed, it bodes well for the final release. My opinions on dumbing down aside, it’s clear that Microsoft has jettisoned a great many features of Windows 7 in order to bring us a leaner and more responsive operating system. I haven’t yet managed to get my sticky paws on an SSD (solid state drive) which is what Windows 10 really deserves and needs, but even on a mechanical drive (aka Spinner), it races along. I haven’t got the benchmark figures to hand just yet, but suffice to say that it runs like lightning!

You can have your cake and eat it

Although I’m still reeling from all those silly changes Microsoft made in Windows 8, many of which are now carried over to Windows 10, such as burying so many configuration settings in unfamiliar places and removing many features completely, such as Media center and CD/DVD playback for example, it’s clear that they’ve gone to great lengths to streamline the operating system. Who needs a built-in DVD player anyway when you can download VLC and other media players? 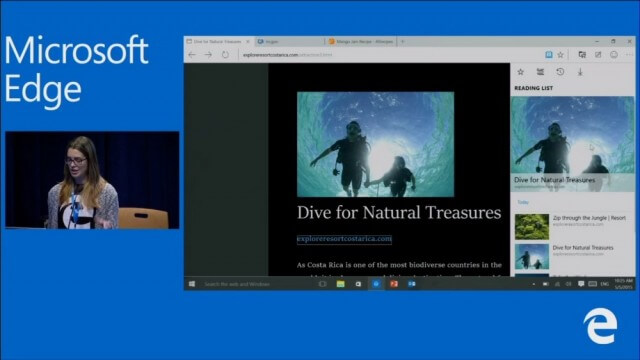 But wait, Microsoft have confirmed that a DVD player will be available for Windows 10 later in the year, but we’re not sure in what form, but at least they seem to be listening to opinion and feedback. Which leads very nicely onto Edge, which used to be called Spartan for very good reasons. This browser is nothing like Explorer, which I happen to like, but is a sleek and very lightweight alternative with a small footprint and lightning fast. Naturally, I’m writing this article using Edge and combined with the distraction-free writing mode of Word Press and Edge’s very minimalist look, it makes for a pleasant experience, which can only be described as well, totally distraction free. There are one or two minor glitches, such as some weird text gobbledygook when cutting and pasting and a limited amount of user options, but I’m pretty sure they’ll be sorted when Windows 10 goes public and yes, it is lightning fast.

Gone are the days of My Computer and My This and That. Your PC is now a device, in line with Microsoft’s cross platform strategy, but that’s OK because you can rename them anyway if it irks you. File Explorer has a very clean, flat profile which isn’t to everyone’s liking, but it get’s the job done with a minimum of fuss and clutter, depending on how you sort the tree and quick views of course. It’s pretty much the same animal as the old Windows Explorer from Windows 7 with a few added features such as quick access and of course ribbons, if you like ribbons that is.

NVIDIA will support the DX12 API on all the DX11-class GPUs it has shipped; these belong to the Fermi, Kepler and Maxwell architectural families

The DirectX 12 API is great news for all gamers and whilst Nvidia has confirmed this backwards compatibility, AMD has also confirmed the same for APUs and GPUs from AMD E1/E2/A4/A6/A8-6000 Series APUs, through HD 7000 series to current R9 cards (source).

An easy way to check your current DirectX version is run>dxdiag: 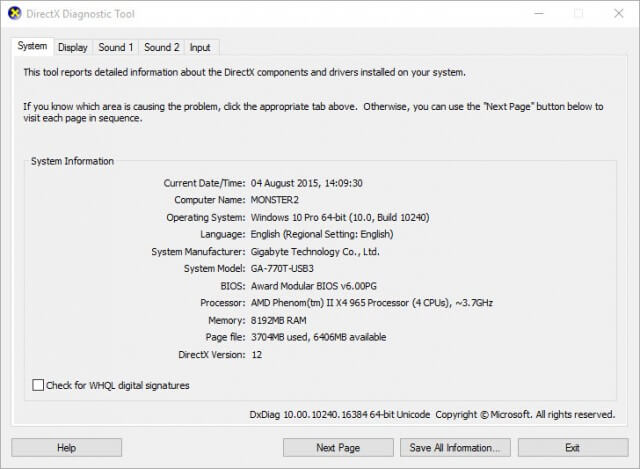 Some are saying that frame rates are almost double in Windows 10, and I have to say that I’ve seen very real improvements in Tomb Raider (2013) on an HD 7950 on Ultimate settings and at least a 15 FPS improvement in GTA 5 on very high. Using a newer GPU such as a GTX 970 yields even more impressive results and for many of us, DirectX 12 could well be a game changer and the deciding factor for moving over to Windows 10. It is course worth noting that the game will have to have been coded for DX12.

You won’t need to change your graphics card to enjoy the benefits of DirectX 12.

And a tech demo from Square Enix of how it all looks in action:

Will you upgrade to Windows 10?

For most of us it’s a question of habit, but if something new and exciting comes along that improves our way of life in one form or another and those pros outweigh the cons, it’s pretty much a done deal.

At this moment, I’m on the edge.