In a previous article we learned about hard drives. A hard drive is similar to your long term storage, the ability to remember your childhood memories. If we continue in the same train of thought, a motherboard is similar to your central nervous system. Just like your central nervous system allows all the parts of your body to communicate with your brain, a motherboard allows all parts of a computer to communicate with the CPU.

A computer motherboard contains all the necessary sockets, plugs, pins, and connectors to attach every needed item to your computer. All of these are connected by little strips of copper called traces. Traces are basically tiny delicate wires that are attached to the motherboard itself. Without a motherboard you do not have a computer, only parts.

Motherboards are similar in their appearance and share many of the same connectors and functions. Although they are similar each is slightly different, even those from the same manufacturer. Engineers determine where each of the components will be placed on the motherboard and how traces will connect them. Because of this the location of the CPU and other parts may be in slightly different locations on the board. To complicate matters there are also different sized motherboards called form factors. The most common sizes today are:

AMD and Intel processors are designed with different sizes, architecture, and pin layouts. We will talk about CPU’s in a future article, but CPU choice plays heavily on motherboard choice. Here are a few points to keep in mind:

So if you are building a new computer you need to decide which CPU brand, architecture, and socket you want before you pick a motherboard. Of course, if you are replacing a motherboard with a new one it is important to know what CPU and socket is on the current one so you can choose an appropriate replacement.

If you really want to impress your friends take them to a computer store and say, "I’m looking for a Socket 775 motherboard!". Works every time!

Let’s get to the good stuff! 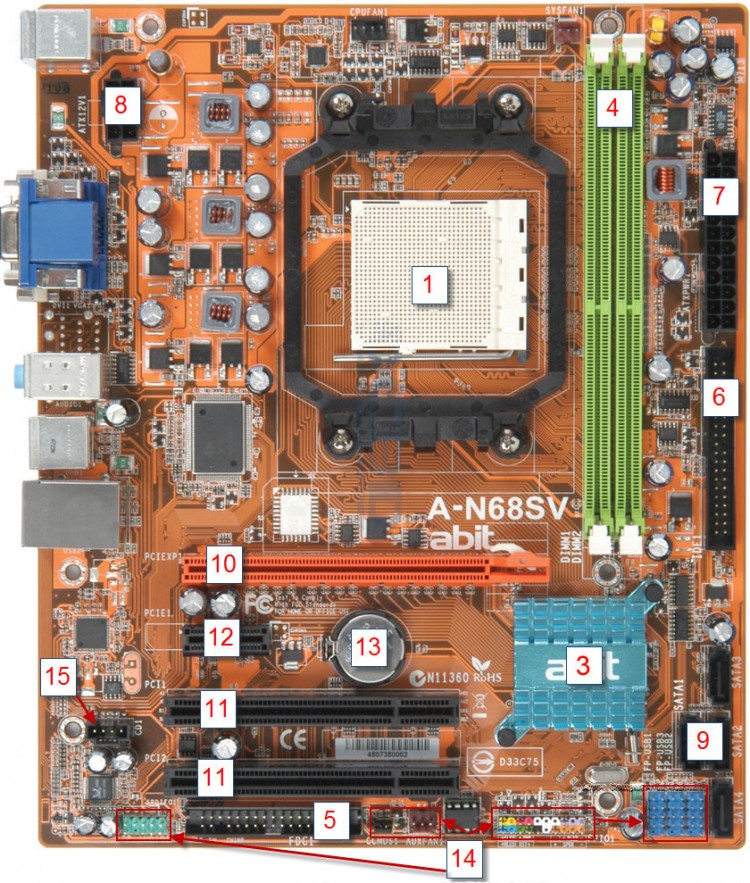 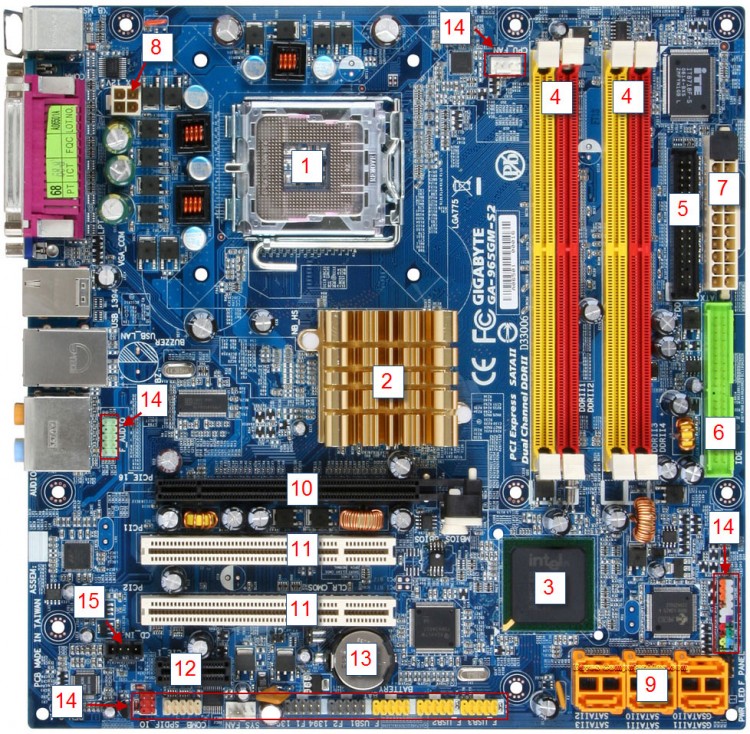 Take a few minutes to study the images and marvel at the technical wonder that is a motherboard! So what are all of those bits and pieces?

Hey! Something is missing here!

Did you notice that there is no Northbridge(#2) on the Abit motherboard? Go back and look, I promise you won’t find it.

AMD moved the Memory Controller from the Northbridge to the actual CPU several years ago. Because of this AMD chipsets combine the remaining functions of the Northbridge onto the Southbridge chip, thus creating a one chip chipset, though some manufacturers are referring to this chip as an MCP, Media Communications Processor.

This approach has some very promising potential affects on performance. The potential performance benefits are so much so that Intel will be following suit with their upcoming Nehalem chips to be released in late 2008.

Points to remember when planning a purchase

There you have it! Now you know everything there is to know about motherboards (OK, not quite). At least you have a great start. You have the knowledge to buy the right one, and what all those chips and connectors do if you ever need it.

2 thoughts on “What is a motherboard?”