You hear people talk about them. You read specs when you buy a computer. You may have seen one. You may have actually installed one. They are both the bane and blessing of computing, but what are they and how do they work? I bet you thought they were full of gears and magic pixy dust!

The hard disk drive was invented by IBM in the mid 1950s with an amazing capacity of 5 megabytes on it’s 24 inch wide disks. A high end expensive staple of business, the hard drive didn’t enter the lay person’s vocabulary until the mid 1980s with the personal PC boom. The current size and shape (3.5 inches wide x 1 inch tall) was introduced in 1988 and continues today. I remember getting a 428mb hard drive in the mid 1990s. The last drive I bought was 500gb, yup, over 1000 times as much storage in the same sized package. Amazing!

I know you are curious. I will open one up so you don’t have to! Let’s have a look at what’s inside the small metal box of a modern day hard drive. 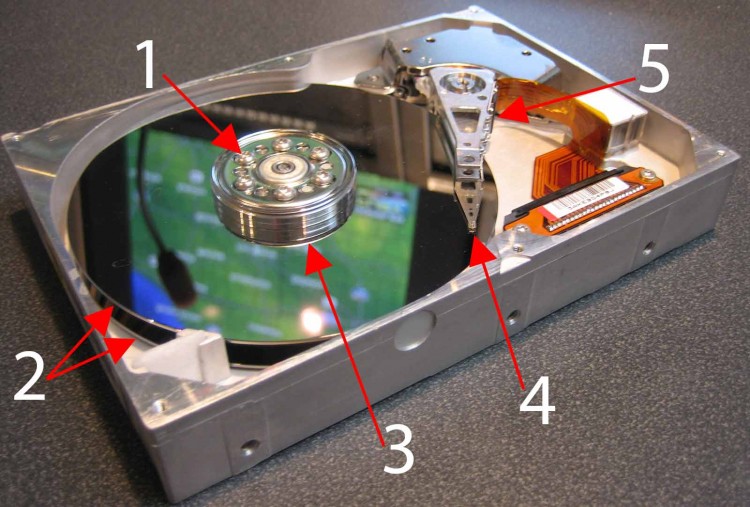 So what are all these shiny, cool looking things?

1. Spindle – The spindle actually serves several purposes. At the base (not seen in the picture) is the motor and bearings that spin the platters. Common motor speeds are 4200, 5400, 7200, 10000, and 15000 RPM (rotations per minute). 7200 RPM is the most common speed for desktop drives, while 10000RPM and 15000RPM drives are generally more expensive and used in a business server environment. Above the motor are the platters and spacers to correctly position the platters.

2. Platters – Platters are where the data is actually stored. Usually made from aluminum, glass, or ceramic material and covered in a microscopic magnetic coating. Platters are generally two sided, meaning there is data stored on both sides. This drive has 2 platters, but the number of actual platters is variable based on design, capacity, heat build up, etc.

3. Landing Zone – This is an area approximately 3mm wide where the heads rest, or park, when the drive is not in use. This area allows the drive to approach its rotational operating speed without any damage occurring to the platter or head. It can’t be seen in the above picture, but this area is without the magnetic coating found on the rest of the platter and is noticeable if held at the right angle to the light (think of holding a CD and looking at the reflection). This makes the landing zone have slightly less height that the remainder of the platter.

If you remember grade school I’m sure you did several experiments involving magnetism. Maybe magnetizing a regular piece of metal by passing a magnet over it? The head is, in basic terms, an electromagnet changing the magnetism of the platter’s magnetic coating as it passes over.

For the magnetic change to occur the read/write head must be extremely close to the platter surface. As the platters spin they drag air with them through friction. This moving air actually causes the head to "fly" over the platter like an airplane wing and is called an air bearing. If you were to disassemble a drive and move the head by hand you can feel the head actually scraping the platter as you move it from side to side without the benefit of the air bearing. That’s how close the head and platter are!

5. Actuator Arm – The actuator arm holds the read/write heads and controls their position relative to the platters. Think of it as the tone arm of a phonograph, without the grooves.

What Makes a Drive Fail?

Fortunately, for us, they are pretty robust when you take into consideration all that is happening inside the little box, but there are several main causes of failure.

Heat – Heat is a major concern for most electronic devices, and this holds true for hard drives as well. Extreme heat can lead to failure of the electronics, spindle bearings, and physical changes in the platter. With the incredible rotational speeds of today’s drives friction increases. More friction = more heat. Increased heat is also an indicator of a failing drive.

Head Crashes – Because the tolerance between the read/write head and platter is so small it doesn’t take much to cause the head to make contact with the data portion of the platter. Drives are sealed to prevent outside contamination, except for a small filtered hole to equalize pressure. Loss of spindle speed due to motor or bearing failure can cause the head to lose the air bearing it rides on. This in turn would cause the head to "fall" (crash) onto the platter surface and damage it. This crash could dislodge some of the magnetic material from the platter, which would contaminate the inside of the drive by leaving tiny obstacles on the platter in the path of the head. Physical shock can also cause a head crash. This isn’t as big a factor as in the past, but still something to consider.

Motor and/or bearing failure – should the motor or bearing fail the platter won’t rotate, thus data can not be read from the disk. This could also cause a head crash if the right circumstances are present.

There could be many other failures in the complicated device, but I think you will find these to be the "Big Three".

What to Look for in a Hard Drive?

The two main measurements of speed are access time and throughput.

Access time refers to the time frame beginning the moment the computer requests data and ending when the data request has been completed. The main factor controlling access time is rotational speed. If everything else remains the same a 7200RPM disk will have a faster access time than a 5400RPM disk.

Throughput is the measure of data that can be processed during a given time frame. The best way to increase throughput is the increase the density of the data stored on the platter. Think of placing a stone walkway in your yard. The closer the stones are the quicker you can get from the beginning to end of the walkway (stay off the grass!).

Perpendicular technology applies the magnetic particles vertically, or perpendicular to the platter. This allows for a huge increase in density, which in turn increases throughput. Aren’t we lucky?

So what does this mean?

If you are looking to replace or add a hard drive these are items to consider. You will find most consumer hard drives for desktops have 7200RPM speeds, laptop drives are currently available in 4200, 5400, and 7200RPM speeds. Laptops often operate by battery power. As RPM increases so does the power required to operate the drive. Faster drive = less operating time on battery. This isn’t a concern with a desktop, so make sure you buy a 7200RPM drive.

The size of the drive you purchase is entirely up to you. You have to determine your own storage space needs. Don’t forget to consider future requirements. Remember that greater density means greater throughput, so larger hard drives generally have better performance given the same RPM. Although the largest drives have the largest prices. If price is an concern look at drives that are one step under the top dog! Another way to compare is take the cost of the drive divided by the size of the drive. This will give you the cost per gigabyte, which is useful when comparison shopping.

Above all research your purchase! Tom’s Hardware does an excellent job of researching hard drives. Be sure to take a gander before your next purchase.

2 thoughts on “What is a hard drive?”