Random Access Memory is more commonly referred to as RAM, and no it isn’t an animal! RAM is used by the CPU as short term data storage for your computer. RAM is also the fastest storage location available to the CPU, due to this adding RAM is the most cost efficient thing you can do to increase performance. RAM is actually a series of memory chips mounted on a circuit board. 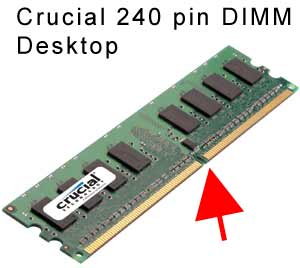 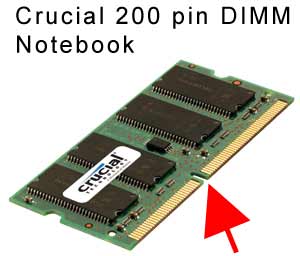 What happens when you do not have enough RAM?

Your computer has a fixed amount of RAM. As you open programs Windows allocates memory from RAM to the program, which allows the program a place to quickly store the data in use. If the program requires more RAM or you open additional programs, the amount available for other processes dwindles because there is a fixed amount to begin with. When Windows sees this happening it moves less used data from RAM to the hard drive. This is called Virtual Memory and is stored in a file named pagefile.sys. The hard drive is not nearly as fast as RAM so this often results in a slow down of the computer. The goal is to have enough RAM so that virtual memory is used little, if at all.

What do all these numbers mean?

The first thing you need to know about is Front Side Bus, or FSB. The FSB connects the CPU and the chipset and is usually listed as a frequency in megahertz (Mhz). You can look at the FSB as a garden hose connecting the CPU and chipset. The higher the listed FSB frequency – the bigger the garden hose – the more data it can pass. This not only affects memory, but everything else controlled by the chipset on a motherboard.

The FSB is important because it sets the performance baseline for a CPU/motherboard combination. The common FSB speeds in use today are 100Mhz, 133Mhz, 166Mhz, and 200Mhz. Another point to remember is that many chip manufacturers are beginning to publish FSB numbers as Millions of Transfers per Second (MT/s), which is technically inaccurate but looks good from a marketing standpoint. MT/s is accurate from a bandwidth standpoint, so it is important -maybe more important than the actual FSB clock speed- to look at.

Until a few years ago signals were sent to memory on the rising pulse of the clock cycle and memory operated at the same speed as the FSB clock. At that time FSB speeds were either 66Mhz, 100Mhz, or 133Mhz and RAM was labeled accordingly as PC66, PC100, and PC133. In the early 2000’s manufacturers were able to reliably send memory signals on both the rising and falling clock cycle. They called this technology double pumping.

DDR, or Double Data Rate, memory is the result of double pumping. DDR can perform memory transfers at twice the FSB speed! But wait! It get’s better!

As time goes on technology improves. While DDR was popular 5 or 6 years ago, DDR2 has taken it’s place with DDR3 becoming more and more popular everyday. As the memory technology improves the speed doubles, which means better performance. Not only does it become faster, but more energy efficient as well. DDR required 2.5 volts to operate. DDR2 requires only 1.8 volts and DDR3 only 1.5 volts.

The most important knowledge to gather from the above list is to compare actual FSB speeds for each memory type. Notice how each progression improves performance dramatically at a given FSB speed? Isn’t technology grand!

What you need to know about RAM before you upgrade

I use and recommend Crucial Memory. Even if you don’t buy their memory they have a great tool on their site which allows you to see what type and speed memory you have in your computer!