The reports of my death have been greatly exaggerated ~ Mark Twain

With the popularity of Social Media, it is not uncommon to discover that news of a celebrity death is just a hoax. People read something about one of their favorite celebrities passing away and feel the need to spread the news to anyone who will listen. Really? It amazes me what people share on the Internet. Celebrity Death hoaxes ravage like wildfire, without any substantiating proof. Twitter is the worst platform for this, with Facebook next.

Just recently I accessed my Facebook page only to see my newsfeed filled with stories that David Bowie had passed away.

I immediately shrugged it off as just another celebrity death hoax. You know the ones that say Paul McCartney or Cher or some other celebrity is dead or has had a major misfortune in their lives. I didn’t want to believe it, so it led me to some investigating on my own, only to find this was indeed true. I was so sad when the story was confirmed across various news sources. I grew up with an older sister who is a big David Bowie Fan, so I knew of his music and was a fan as well. It turns out he had been sick for the past 18 months with cancer. There was a certain amount of shock among Social Media that he did not share his illness with fans. Do people really expect celebrities to publicly share every part of their lives? 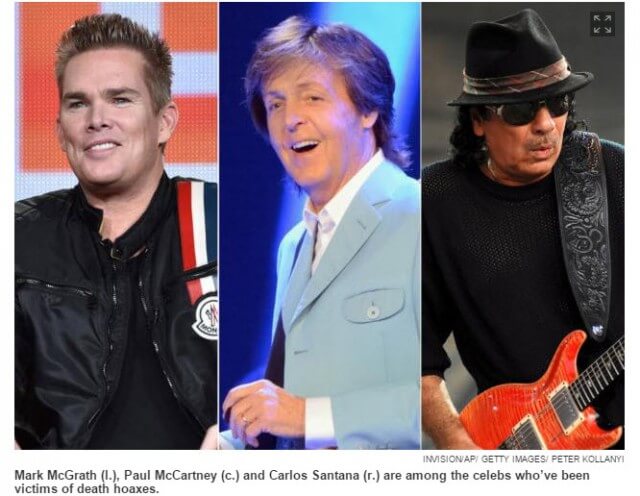 I recall back when Robin Williams passed, the same scenario. Once again, I found out via Facebook. Often when a celebrity dies they receive more publicity than when they were alive. Often times the Internet immortalizes people and they will make more money from the grave than when they were alive. Somehow their death causes people to reach out and want the products or memorabilia attached to that person.

I hold the rights to a warehouse full of movie/music memorabilia. I have lots of things that I sell from time to time on eBay. It is a known fact that the items of Patrick Swayze, Robin Williams, Elvis Presley, Frank Sinatra, etc… generate more interest, as well as money, than those of people who are still numbered among the living, such as Britney Spears, Eminem, Cher, etc. There are collectors out there who will grab everything they can get their hands on. As if having a piece of memorabilia will make that person still feel alive to them.

I recall when Princess Diana passed away. I stayed up for the funeral and recorded it. Looking back on it now, I think why? I was a big fan of the late Princess and was devastated when she died in the car crash. After she passed, items of hers appeared everywhere. Lookalike rings she wore, dolls, photos, etc which generated much money. How many people who watched the funeral really cared? I can only speak for myself, and though I never met the Princess, I was very upset to hear of her death. Prior to her death I read all I could about her. She was definitely the “People’s Princess”.

Jon Bon Jovie is just another example of a celebrity who was reported to have died. Here is a photo of him with a personal message. Can you imagine what it must be like for family and friends if they have not talked to that person in a while and see something like this fabricated and posted on the Internet ? 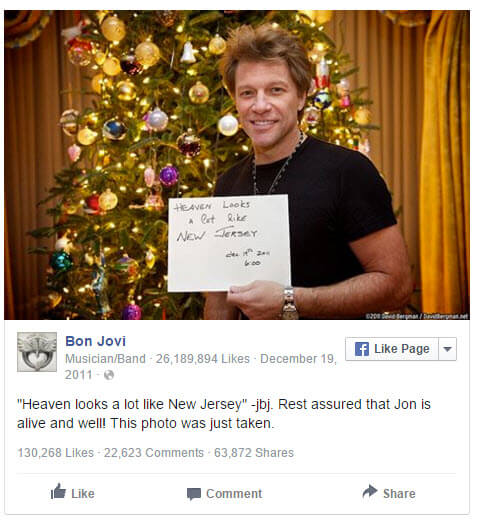 There is even a website you can go to where you can insert a celebrity’s name and generate a fake news story. Check it out at: http://fakeawish.com/  So who really thinks these things up? I mean seriously, they need a hobby or a job or something to keep them occupied. Do the people who create these fake news stories think this is funny? 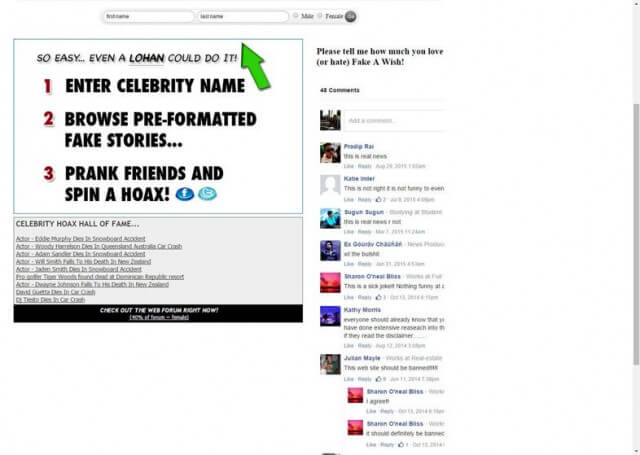 It is times like this that teach us all a lesson to not always believe what you read. Verify the source for the information to determine if it is true or not. It reminds me of the old “telephone” game we played as a child, where you whisper a secret in someone’s ear and pass it on down. By the time it reaches the last person, the original message has been distorted beyond recognition.

Sad to say, but Technology and the Internet has turned a final event such as death into a Social Media flutter of activity. Every celebrity out there has to tweet their condolences on Twitter. You wonder, did they even know this person? Are they doing it just to take advantage of the additional publicity? Some even blatantly use these occasions to promote themselves at the same time as expressing condolences to the family.

David Bowie did indeed pass away and he leaves behind not just fans but family and friends to mourn him. His Facebook page jumped significantly with followers following the notice of his death. I find that rather disturbing. 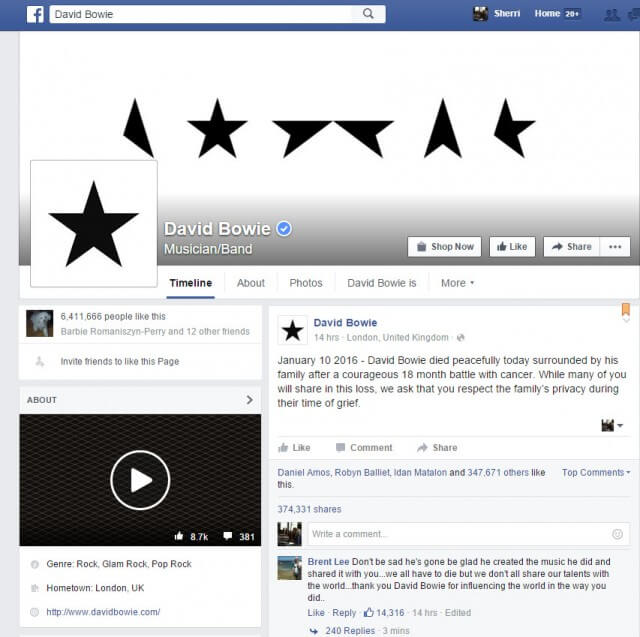