I stumbled upon this issue quite by accident. My old mate brings round his desktop tower because none of his three browsers will open – Chrome, Internet Explorer, and Edge. I set the tower up on my workbench, connect to monitor and peripherals, and when the Windows 10 log-on screen appears I ask him to input his password. Around 15 minutes and 30 odd tries later, and the password still hasn’t been accepted. “But it’s the only one I’ve ever used” he protests. I calmly explain to him that it’s unlikely the computer has forgotten the password and much more within the realms of possibility that he has forgotten it.

Long story short, he finally rings she who must be obeyed, asking her to go to the little book on the computer desk and lookup the password. I hear her mumble something over the phone and there he stands with a sheepish look. So, having finally typed in the correct password and accessed the operating system I can now check out why these browsers aren’t working. Turns out they are working fine, all three of them, no problems at all. Which, after a rather lengthy preamble, brings us to the topic at hand.

When we opened his Edge browser, he pointed out that his usual news feeds were not displaying on the page. I admit I have hardly used Edge, but when I opened up the browser in my Windows 10 system to check, sure enough the page was immediately populated with thumbnails from something called “My news feed”: 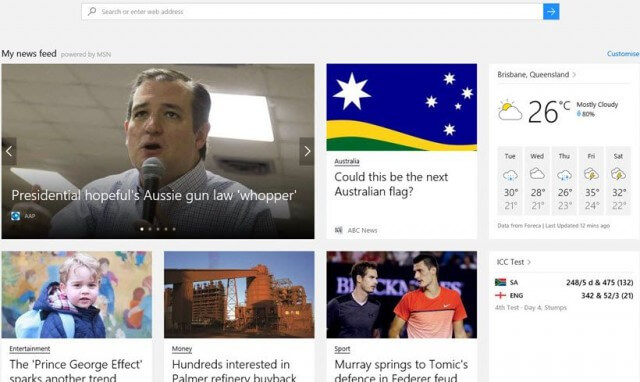 This is a feature my mate liked and had been using until it apparently suddenly went MIA. First thing I did was to check all his Edge settings against mine, they all matched perfectly. So, onto the net to search for possible causes and solutions. Lots of reports of similar issues and many suggestions on how to fix it, none of which helped one iota. I was about to throw in the towel and tell him he’d just have to put up with it when a little light bulb went off in my head. Knowing my mate had been using the Edge browser quite a bit and it was unlikely he’d ever cleaned it out, maybe a corrupt cache, or errant cookie, or something, anything – by this time I was pretty much clutching at straws.

So, I went into Edge settings and cleared everything out. Here’s how: 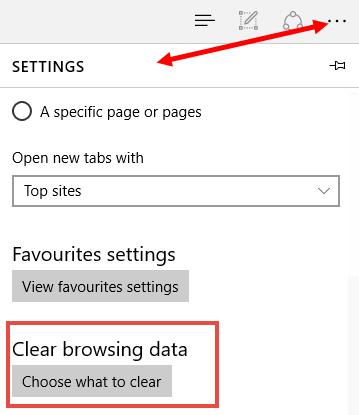 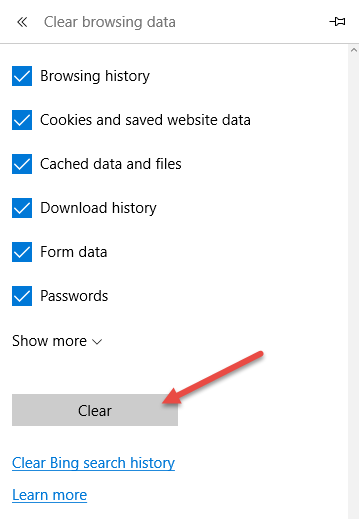 NOTE: I didn’t worry about the options under “Show more”, left them well alone. But I did click Clear Bing search history, just to be thorough.

Anyway, much to my surprise, it worked! I closed Edge and when I opened it again, all the newsy thumbnails populated the page quicker than you can say “we’ll be back”. My mate thinks I’m a genius, I’m still in a state of shock. All’s well that ends well.