Whenever possible I like to put my machines to bed in an orderly fashion, which usually means hitting SHUT DOWN or SLEEP. However, there are times when unknown forces conspire against me and I feel trapped in a dark world of swirling demons, all determined to send me to the edge of madness. Power cuts and PC freezes aside, I can pretty much pinpoint the moment when I was plunged into the purgatory of CHKDSK, an event that takes place when the PC is switched on and that was when I first installed Windows 10 on my brand spanking new SSD a couple of months ago. As with all new OS installs, I always disconnect all other drives before installing to the target drive so as not to have the new OS change any boot settings on the other installations. This policy has proved to be correct for me over the years but for reasons unknown, has proved to be a problem of coexistence between Windows 10 and 7. It’s worth mentioning that when Windows shuts down unexpectedly (power failure etc), it’s gone dirty, a phrase I absolutely love, in which case CHKDSK kicks in on the next reboot, usually.

Whilst the scary image above gives an idea of my setup, it’s worth pointing out that there are five physical drives, but the eleven partitions are a tad misleading. In fact, when CHKDSK kicks in, it gets its claws into twelve partitions because it treats the recovery folder on one of the Windows 10 installations as a separate partition, oddly enough. I can easily delete the recovery folder of course, but that’s not the point here; it’s the amount of time it takes to check each partition or alternatively, hit a key on the keyboard to make it stop, which in this case was twelve times. At this stage a hammer would be handy, especially that I’ve now discovered computer rage. I had also re-assigned drive letters to the system reserved partitions in order to carry out the DOS command to disable CHKDSK through the command prompt as, without a drive letter, the instruction would have been impossible. 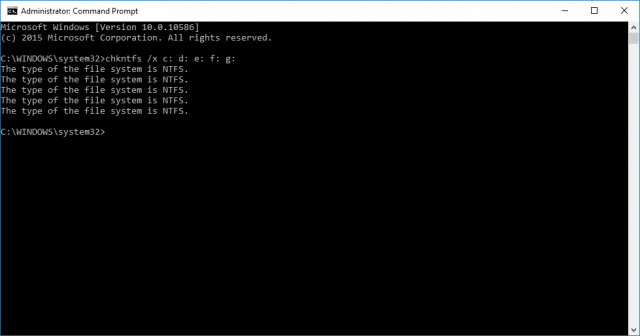 It’s not difficult to prevent CHDSK from coming into play on reboot, which you can do by opening a Command Prompt (with admin rights) and typing chkntfs /x c: ?: , where ? represents other partitions you wish to exclude from disk checking. For example chkntfs /x c: d: e: f: g: etc. This is all well and good in theory, but if the system throws another wobbly and you end up with another dirty shutdown, chkdsk will probably kick in again, which many have identified as a problem when dual booting Windows 10 and 7 even with both versions residing on different physical hard drives. The problem appears to manifest itself when rebooting from Windows 7 into Windows 10 either using a boot manager such as EasyBCD or by using the more conventional route of changing the hard drive boot order in the BIOS/UEFI. 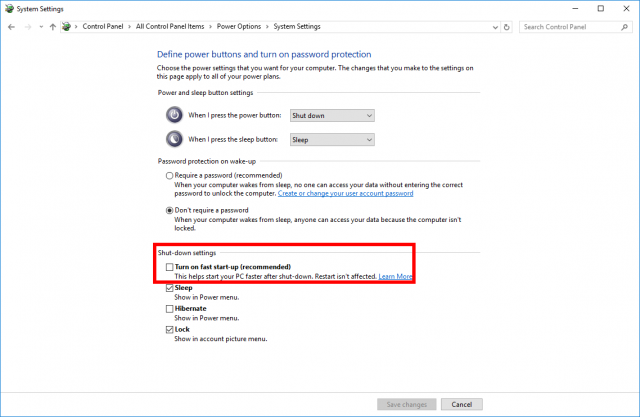 I’m not saying that CHKDSK is useless, far from it; I’ve had corrupted systems come back to life after having used it (with the /f switch) as well as NTFS4DOS, which is the same but especially useful when booted up from CD or USB. However, some are suggesting that the Fast- Startup feature of Windows 10 and 8 is in fact a hybrid shutdown, similar to hitting HIBERNATE or SLEEP, which is why the system is able to boot to the desktop so quickly. Have you ever put the PC to sleep or into hibernation, lost mains power and then restarted? When that happens, regardless of the OS, the computer thrashes about like crazy trying to find its previous state, decides it’s dirty and does the only thing it’s programmed to do and runs CHKDSK. Kind of like HAL 9000, but not so scary.

I grabbed the above image from Tenforums to show how Fast-Boot speeds up your boot time to desktop, but when using an SSD, for me at least, the difference is barely noticeable and by disabling Fast-Boot permanently on my main gaming machine, the problem of chkdsk running after booting to Windows 10 following a Windows 7 session, appears to have gone away. Interestingly though, disabling it doesn’t affect RESTART, meaning that RESTART actually does a full shutdown process cycle.

So, now that I’ve given the benefit of my traumatic experiences with the dreaded CHKDSK, how was it for you? Have you been able to conquer this malaise and get on with the rest of your life, or are you stuck in a dark, forgotten place hoping for rescue?

2 thoughts on “How To Fix Chkdsk Continually Running”