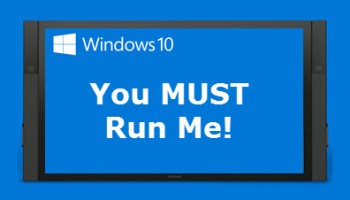 Microsoft has announced significant changes to its Windows 7 and 8.1 support policy which will effectively force owners of PCs fitted with the latest processors to run Win 10.

Until now, Windows users have enjoyed considerable freedom to combine older operating systems with newer hardware per medium of Microsoft’s commitment to providing updates supporting new technology and drivers. In a recent official announcement, Microsoft’s Terry Myerson has confirmed that this type of support will not be ongoing for Windows 7 and 8.1.

Windows 7 and 8.1 will continue to be supported for security, reliability, and compatibility through January 14, 2020 and January 10, 2023 respectively on previous generation silicon. Going forward, as new silicon generations are introduced, they will require the latest Windows platform at that time for support. For example, Windows 10 will be the only supported Windows platform on Intel’s upcoming “Kaby Lake” silicon, Qualcomm’s upcoming “8996” silicon, and AMD’s upcoming “Bristol Ridge” silicon.

Recent Intel Skylake buyers will have 18 months grace in which to upgrade their systems to Windows 10. However, the grace period does not apply for everyone, Microsoft has provided a list of Intel Skylake models and OEMs (Dell, HP, Lenovo, NEC) that will be eligible for the extended support: Skylake systems supported on Windows 7 and Windows 8.1 (the list will be updated as new supported models are released).

Through July 17, 2017, Skylake devices on the supported list will also be supported with Windows 7 and 8.1. During the 18-month support period, these systems should be upgraded to Windows 10 to continue receiving support after the period ends.

How Much Impact Will This Have?

What will happen if/when users try running Windows 7 or 8.1 on new unsupported silicon? That’s the $64 million question, which probably won’t be fully answered until real world experiences come to the fore. Some pundits are predicting serious consequences while others see it as more of a scare tactic. My guess would be that, eventually, the impact will be quite significant.

This decision clearly reinforces Microsoft’s determination to move the entire Windows ecosystem to Windows 10. While this almost certainly won’t be a popular decision, I do have some sympathy for Microsoft’s approach. After all, the whole idea behind Windows 10 is to get as many users on the same platform as possible. One can only imagine how much money maintaining the current fragmented support infrastructure must gobble up.


One thing for sure; the gap between users’ enthusiasm for new hardware and their attachment to older software has now been considerably widened.

16 thoughts on “New Processors Only Supported by Windows 10”