It appears the company behind ScanGuard is not keen on users downloading a trial version so they can take a look at the software prior to purchasing. There is no “trial” download available on ScanGuard’s home page, in fact there are no download links at all. Clicking a conspicuous GET STARTED button merely initiates a popup asking you to create an account: 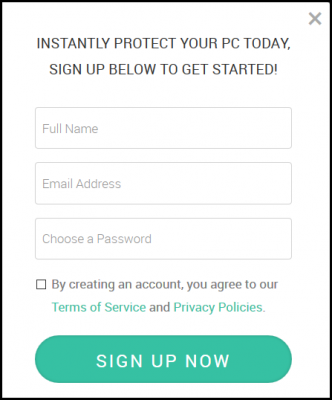 So, I entered a fictitious name and disposable email address and clicked the SIGN UP NOW button hoping to access some sort of download. Alas, the next page merely prompted me to pay $49US for the software including a section to input credit card details. No way José! I did manage to locate a list of phone numbers to contact for “billing inquiries only” and a quick call to the number listed for Australia connected me to a young lady with a distinctly offshore accent.

I eventually located a download link on a third party site so I installed ScanGuard in a pristine VM (virtual machine). Scanning the downloaded executable through Virus Total produced red flags from 3 antivirus engines:

That’s only 3 red flags out of a possible 55 and all from little known antivirus engines. Still, where there’s smoke there’s often fire. The installation process did not reveal any bundling or unwanted extras. Mind you, it was pretty much devoid of anything – no EULA to read, no “I Accept” or “Cancel” buttons, no options to change the default installation folder or where shortcuts are created – once you run the ScanGuard executable, installation proceeds quickly and without pause.

At completion of the installation process you are immediately required to create an account. Unlike most other online accounts, ScanGuard does not appear to be overly concerned with security – it doesn’t insist on you confirming the password by re-entering it and there are no rules governing the strength of the password, it can be anything. Make of that what you will but alarm bells rang for me. I chose a password that I’ve never used and will never use again.

As soon as the registration was completed ScanGuard updated its definitions and then scanned the system via 4 components – Antivirus, System Boost, Disk Cleaner, Web Security –  presenting its results at completion of the scan:

Results were not exaggerated and pretty much what one would expect, so no problem there. However, resolving any of the reported issues requires payment, even to clean up the measly 188MB of junk files. Click any of the buttons to fix issues and you’re immediately taken to ScanGuard’s payment page where your are urged to upgrade. So, if you see a link or ad for a free ScanGuard, don’t be fooled, nothing about ScanGuard is free.

Next, I checked ScanGuard’s presence in Task Manager which revealed 2 processes and one service running, pretty much the norm for this type of software.

The company behind ScanGuard is very difficult to nail down, there are no details on the site (no “About” page) and speculation among forum discussions uncovers a confused and convoluted ownership. The only review I could locate was from a site called “top10bestantivirus.com” which registered in October 2016, and, according to Whois, the ScanGuard site came online in June 2016. I do not believe in coincidence – the close proximity of the 2 sites startup dates and the fact that top10bestantivirus.com rates ScanGuard among its top antivirus solutions clearly suggests that the two are somehow connected – the logical scenario being that top10bestantivirus.com was specifically set up and designed to promote ScanGuard. 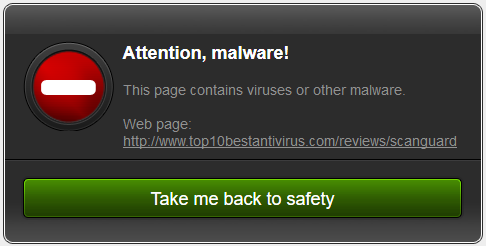 As I said, I don’t believe in coincidence.

It’s difficult to judge if ScanGuard is guilty of anything other than very aggressive marketing. While, in my case anyway, ScanGuard did not appear to directly adopt any typical scan and scare tactics and also appeared to perform its functions as advertised, there is enough circumstantial evidence to suggest that ScanGuard should be approached with extreme caution. Personally, I wouldn’t touch it with a barge pole.

UPDATE: Even while in the process of writing this article, it appears the ScanGuard site has been completely changed and is no longer rated Red by Bitdefender TrafficLight. One can only assume this was done in an attempt to overcome adverse publicity.

70 thoughts on “Is ScanGuard Legitimate?”