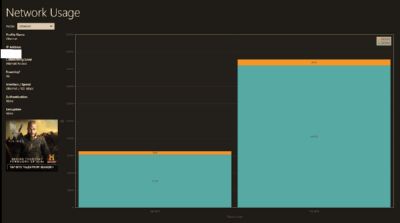 Our very own Dave Hartsock wrote an article back in 2011 that still makes a lot of sense to me. Some articles seem timeless and this is one of them. You can read “Do Broadband Caps Make Sense” to give you some food for thought.

If you happen to be one of many being served by any of the offending ISPs, then you are probably very conscious of just how much bandwidth you are actually using each month. Many of you may be using a third-party utility to monitor said usage.

Windows 8.x provides a native application to do that without the need of using yet another third-party “tool”. It is called, oddly enough, Network Usage and the above image shows you how it looks. Since I just started using it in January this year only two months are displayed. I watched a lot of NetFlix this month. Since the final episodes of Breaking Bad have just been released, I expect to be watching a lot more.

Note: If you don’t happen to have it installed on your computer, simply type Network Usage on the Windows 8.x Start Screen. Installation is painless, fast, and free.

The above image shows usage by the month. To see a daily usage graph for a particular month, simply double-click on a month and you will see something like this: 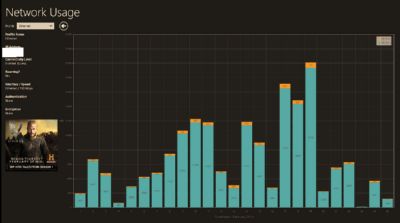 To see an hourly breakdown, double-click on any given day.

Fortunately, knock on wood, my ISP hasn’t invoked any such limitations on my internet usage– yet. I use the application as more of an exercise in curiosity than anything else. For anyone who suffers the indignities of Broadband “Caps”, a monitor of this type becomes a grim necessity. It is easy to use, it is fast, and as far as I can tell, accurate.

I especially like that I only have to use a native application. It doesn’t have to be manually loaded at system boot; it does its monitoring auto-magically in the background and a single click will load it up and provide you with more information than you probably care to know.

Has anyone used this? Any weaknesses? Strengths? How does it compare to other bandwidth usage monitors you have tried?

7 thoughts on “How To Know Your Bandwidth Usage – Windows 8.x”