If you’ve been following broadband, or are a broadband customer in the US, you may have heard that several large providers have begun programs to limit (cap) the amount you can download under the guise of better service. Of those who are instituting this program Comcast seems to have the highest cap of 250GB per month with most of the pack settling in the 50GB to 75GB per month range. Those going over the limit set by their provider will face a variety of punishments ranging from termination to a hefty fee for each gigabyte over the limit. They (Comcast, Time Warner, Cox, AT&T, and others) have made claims indicating their cost of providing internet access is rising due to the amount downloaded by customers and/or customers who download large amounts of data are degrading the performance of other users.

Well. This just isn’t acceptable and wrong on many levels! 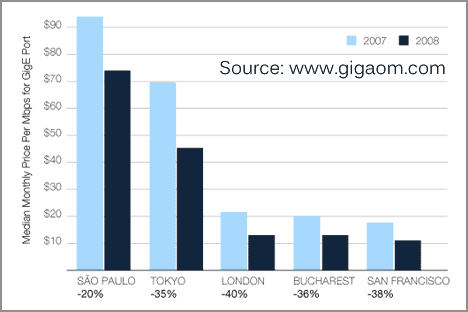 We all know the internet isn’t free. Someone has to pay for servers, routers, fiber, employees, etc. Just as you and I pay our provider for internet access, so does your ISP, though on a wholesale level called IP Transit. What the providers don’t want you to know is their access costs have dropped steadily over the last few years, while they keep finding ways to raise yours. The graph at the right (courtesy of GIGAOM) clearly shows IP Transit prices dropping an average of 30%. When was the last time your bill dropped 30%? I’m guessing never!

50GB may seem like a lot of data, but consider a family of four. Mom watching television shows on the internet, Dad working on a project for work, kid 1 watching a movie online, and the second child playing video games online. That’s a lot of bandwidth, and repeated daily will surely near or exceed the 50GB limit. If not now, in the very near future. It surely puts these limits into perspective!

I recently changed providers from Comcast to AT&T mainly due to Comcast’s recent decision to limit traffic. I researched several companies looking for speed, truly unlimited access, reliability, and other factors. AT&T seemed like my best option and won my business for both television and internet access based on speed, usage policies, and unlimited access. In fact, I actually captured a screenshot of the AT&T page describing their policy regarding download limits.

I see this as the companies setting themselves up for future profits on two fronts:

Either way they are creating a win-win situation for themselves and a lose-lose situation for consumers! All the while stifling the growth of the internet!

What can you do?

The companies who are implementing these policies and pricing structures are the tip of the iceberg. If we don’t act now, and act fast, this could change the future of the internet and stifle growth on multiple levels! If this isn’t stopped it will affect you and your family!

To find out more about this dangerous trend you may find the following helpful:
Comcast caps internet at 250GB
Frontier to enforce 5GB cap
Cable users prepare for overage fees
Rogers Cable starts billing for overages in July