WHS stores files like videos, documents, and music in folders called shares. WHS has a neat feature called duplication. Using duplication a user can specify shares to be duplicated on more than one drive, if the server has two or more drives. When duplication is chosen WHS keeps two copies of each file and stores each copy on a different physical hard drive. Should you experience a hard drive failure the file will not be lost.

If you are one who is concerned about backups not being duplicated I have the answer! Be aware that duplicating backups will use a lot of storage space!

This registry hack is officially unsupported by Microsoft. Using this hack will double the storage space required for backups.

Remote Desktop into your Windows Home Server. Go to Start>Run and type regedit.exe in the window that opens. This will open the registry editor. Navigate to:
HKEY_LOCAL_MACHINE\SOFTWARE\Microsoft\Windows Home Server\Storage Manager\Folders

You will see several folders listed under this key. Click each one and look at the contents in the right pane. The folder we want contains an entry called FriendlyName and a value of Windows Home Server Computer Backup. 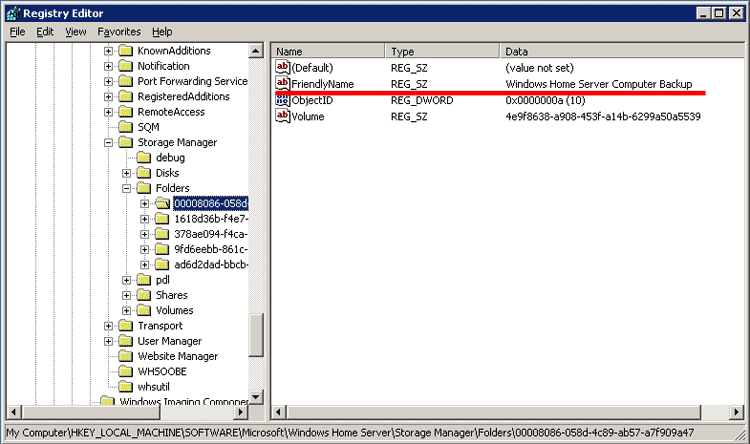 Expand the entry to show the Attributes folder by clicking the + sign next to the highlighted folder in the left column. Right click in a blank area of the right pane and select New>Dword.

Type Reliable in the new entry and press the Enter key. Now right click on the Reliable entry we just created and select Modify.

Exit Regedit and reboot your server. You have now enabled duplication of the computer backups on your server!