Everyone has them. You know, the photos of children that should be kept in a photo album and not shared. Those firsts with your children that you want to brag about. The photo of them on the potty having success. Those same photos can be used on your children’s first date to embarrass them, or put together in a scrapbook to pull out at their High School graduation party. Admit it, you have taken them. Or maybe you have been subjected to the embarrassment of them being shown of you.

Growing up, my parents had some of those photos of me that I wish they had not shared with anyone else outside of the family. There is a photo of me at age 2 in the tub with my rubber ducky. There are quite a few others that surfaced when I started dating. I tried to find my parents hiding spot but could never locate it. No amount of begging and pleading with them would matter– they still used the photos whenever they deemed it necessary.

Cameras are great for capturing those moments that you cannot get back. However, not everyone wants their photo taken. With more and more people using camera phones, the opportunities for capturing those moments is easy. It used to be that you would attend your child’s soccer games or music performance, sit in the audience and smile at them and applaud. Now, parents are trying to get the best photo of their kids in action and the kids are trying to please their parents and losing their focus on the event they are partaking in. Most of the time, the kids really want no part of the photos.  My niece posts photos of her two young sons daily on Facebook. In the majority of the photos, the kids look very unhappy. The caption often reads, “Aren’t my boys cute?”

I stopped responding to the photos only because I did not want to encourage her.

There is a plus side to sharing photos, though. Social Media is great for locating runaways, sharing photos with grand-parents and family that you do not see often.

The thing is, most people never alter their privacy settings on Facebook. They leave the default settings in place and instead of sharing their photos with 25 people, they are sharing the photos with everyone. Some photos can lead to bullying or even someone stealing their child’s identity.

People often ask me why I post photos of my dogs, and of my husband and me kayaking or cycling, and not very many of my kids. My kids are 22, 23 & 25. They all utilize Social Media. They don’t like me tagging them on photos or posting pictures that have not been approved by them first. Rather than cause a rift between us, I elect not to post photos of them. Always think before you post a photo on Facebook. For that matter, always think before you speak. I see so many posts where people get diarrhea of the mouth and ramble on and on about their personal life. Sheesh folks, do you realize people think you are absolutely whack?  Sure, I can elect not to follow their posts on my news feed, but I’m just saying, the things I see and read cause me to say, “Hmmmm…”

In France, authorities have advised parents that they take their strict privacy laws seriously. Parents can face a year in prison and up to €45,000, $49,950 US, in fines for posting intimate photos of their children on social media without permission. This mind you, is France, not the USA. I found it interesting and wanted to share this with you to see what your thoughts are.

With that being said, here is a photo of my kids that only depicts them at a young age. They hate this photo, but I won’t tell them if you don’t. 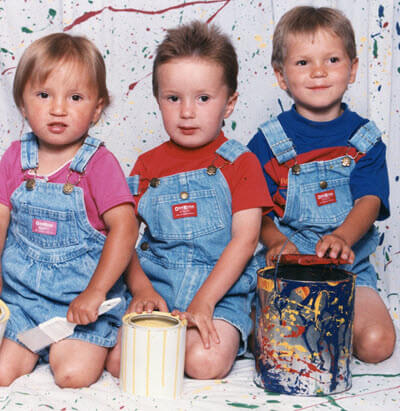