Do you utilize ad blocking software? What follows is my take on the possible consequences of this expanding practice and how it might all eventually impact on the web’s fundamental infrastructure. Agree or disagree? Either way, have your say via the comments. 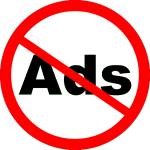 The internet is a wondrous thing, a veritable goldmine of free information and services, and one of very few remaining areas which hasn’t suffered from the constraints inflicted by corporate monopolization. The World Wide Web consists of millions of independent sites, creating an environment which epitomizes the doctrines of competition and freedom of choice. But is that situation destined for change?

The saying that ‘nothing in life is free’ is clearly demonstrated in all walks of life, there is almost always some kind of quid pro quo involved – in the internet world the quid pro quo is often adverts. It’s strange how our expectations differ from the real world to the internet world. In the real world we fully expect to pay for most things yet in the internet world the exact opposite applies… we expect to pay for nothing, or at least, for very little. Fortunately for us, this has been largely achievable, and in no small way thanks to the revenue generated via advertizing.

A vast majority of sites are run and administered by ordinary folk with ordinary jobs who rely solely on ad revenue to help cover the overheads involved. Most are happy if revenue from advertizing even partially covers the costs, ecstatic if it wholly covers the costs, “profit” is not even a consideration. Take away or severely diminish that source of income and you create a recipe for dramatic change. Those affected sites will ultimately need to either find an alternate avenue for generating revenue, or close down altogether.

I am not going to bore you with statistics, suffice to say that there is plenty of evidence to suggest that ad blocking browser extensions, such as Adblock Plus, are having a serious negative impact

on advertizing revenue. If the trend toward ad blocking, and by natural consequence the diminishing associated revenue, continue to snowball, we are bound to see more and more independent ‘little’ sites biting the dust. Ultimately, the emergence of ad blocking software may well be viewed as the beginning of the end of the internet as we know it –  another victory for corporate monopolies and a big smack in the face for freedom of choice.

Its’ all about priorities; would we rather have our favorite sites available for free and including ads, or have to pay some sort of subscription or fee? Or, worst case scenario, no site at all?

So what’s the answer?

This is one instance where I believe the silent minority can do its bit, and with a minimum of effort. Sure, ads can be irritating but we also need to bear in mind that many of the sites we like and appreciate are probably relying on those ads for their very survival. Most ad blocking can be disabled for a specific site, or sites. Running the Adblock Plus add-on in Firefox for example, users can easily specify sites where they want to allow adverts to be displayed:

With the particular site open in Firefox, simply right click the Adblock Plus icon and select “Disable on <name of site>”.

Ads will still be blocked for casual surfing and on those sites which are visited only occasionally, while giving just a little back to favorite sites in return for all their time and effort.

So, as I see it, the answer is not necessarily abandoning ad blocking software altogether, rather to use it more discriminately, or selectively.

I trust you don’t find this article overly preachy, I don’t mean to sermonize. I firmly believe that we (Mr. and Mrs. general public) need to be more proactive in helping maintain the net’s status quo and preserve freedom of choice. The net has grown into an immensely powerful medium and with governments, corporations, and associations all constantly trying to exert their influence, there is genuine cause for concern. Removing the ‘little man’ from the equation can only aid and abet those looking to control what should essentially be a free and open domain.

39 thoughts on “Ad Blockers: A Blessing or a Curse?”