We should all understand by now that Windows 10 is the last version of Windows. When all the previous versions, up to and including Windows 7, have all lost Microsoft support, maybe we can merely call it Windows, without any numbers attached to it. Life will be much simpler that way.

This week’s Quick Tips article will try to eliminate some of the confusion regarding Editions, Versions, and Builds.

How To Find The Information

As is true with all things Windows, there are a number of ways for you to find the information specific to your computer system. Probably, the easiest way is to click the Start button, type winver, hit the Enter key, and you should see something like this: 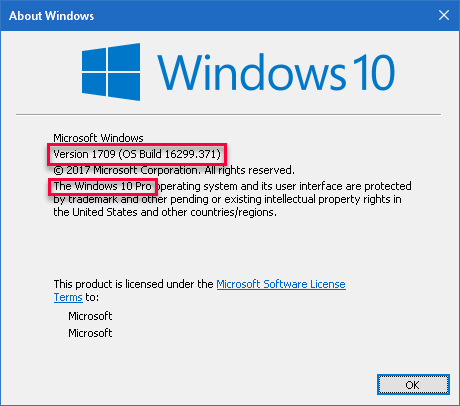 Another way would be to use the Settings App:

That should bring you here: 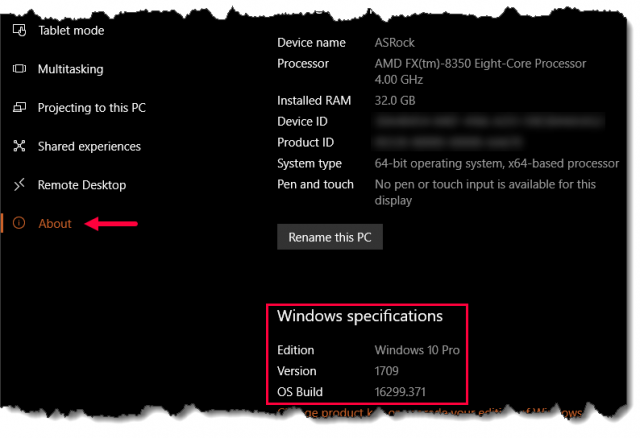 Editions are easy to understand and most people, when asked which operating system they are running, answer with the Edition type. As we all know, there have been many editions created by Microsoft over the years. There are and have been Home editions, and Pro, Ultimate, Second, First, Enterprise, Server, Education, S, IoT, Mobile, and the painful list goes on seemingly forever. I personally like things simple and this is most definitely not.

Windows 10 is now updated a couple times each year and given version numbers. The current version, as of September, 2017, is 1709. This breaks down to the year (2017) and the month (09). These are not absolutely accurate as you may well know. Version 1709 was not released in September. The next version will be 1803, but we are already well past March. Interestingly, Microsoft passed on releasing this version recently in favor of getting rid of some nasty bugs their unpaid beta-testers found (read, Insiders).

I would much rather have a new version released later than sooner if it means a glitch-free environment. Thank you, MS!

Ah, now we come to that part of the whole picture which seems to confuse the most. It really isn’t that difficult to understand. You can think of Builds as a rough timeline within Versions. They are like mini-updates which are uploaded to your system throughout the year. Here is an image I grabbed to illustrate the process (click on the image to make it more legible):

You can see that the latest Build was delivered to us on April 10th (Patch Tuesday). The Knowledge Base (KB) numbers in the right-hand column are links to specific information regarding each build.

This screen grab was taken at this Microsoft Windows 10 Release Information page where you can probably get more information than you care to know.

Next time someone asks you which operating system you are running, you can now tell them you are running Build 16299.371. Try not to be too smug about it; be casual, and enjoy that silly look on their face. 😉

As always, if you have any helpful suggestions, comments or questions, please share them with us,