A device driver is a program that determines how a computer will communicate with a peripheral device.

Without a driver, the operating system won’t recognise the device, rendering it unusable. Or to put it another way; imagine trying to drive from New York to Chicago at night, with no map, GPS or road signs, with one gallon of petrol and no money; you’re not going to make the connection. Since the dawn of personal computers, communicating with connected devices has always been via a small program supplied on a floppy disk, CD, DVD or nowadays most likely by direct download from the net. Modern operating systems, particularly Windows 8, have a device compatibility that was almost unheard of a few years ago and many are able to simply install Windows Wash’n Go style.

Let’s get stuck in

Whilst today’s operating systems are incredibly user friendly in this respect, it remains a fact that many of us are still using older systems and peripherals for a whole range of reasons and manual driver installation isn’t an issue that’s going to go away overnight. 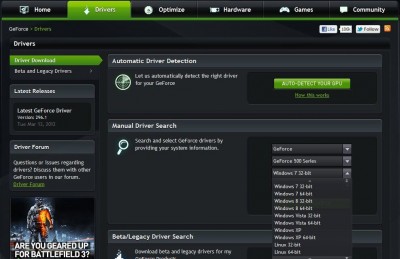 Almost all hardware manufacturers either ship the product with driver media included or make it available online. There is no extra charge for the driver and one would argue that without it would be similar to supplying a new car without an engine. Most hardware manufacturers therefore, maintain their own database of drivers, with many retaining legacy drivers since their first inception. However, there are times when locating that illusive driver is not the easy task we might expect.

Enter stage left the numerous players who offer to solve your driver woes by foul means or fair. A simple internet search using the words driver download will bring up top names like Intel, HP, Dell, AMD, Nvidia and numerous other leading manufacturers. You will most likely also notice a plethora of other sites offering driver updates and bespoke solutions.

Your drivers are ancient

By implication, the above statement is saying that device drivers have a finite shelf life and over time become degraded and damaged to the point where they may bring your entire system to its knees.

I can understand the tyres on your car getting worn out, but device drivers? I’ve played my copy of Tomb Raider hundreds of times in the last decade or so and the only thing worn out is the CD. Drivers will indeed become outdated, but only when a newer version of that driver is released by the hardware manufacturer for security or compatibility reasons. In the above image we are being led to believe that our Realtek HD sound driver from 2010 is considered ancient, which, to the inexperienced user would be a cause for worry and reason enough to update it. The fact that the sound system on our PC is blasting out loud and clear should however, be sufficient grounds to decide otherwise.

Taking a look at some of the driver solution providers out there in the wild, throws up some some interesting questions; first and foremost being: should you pay for drivers?

It’s interesting to note that each of these driver solution programs was run on a clean Windows 7 install, completely up to date as far as humanly possible and yet the scan results in most cases showed at least 20 drivers out of date. Most of these programs appear to have access to a very similar central database and there’s no denying the speed at which the scans are completed; it’s very impressive indeed. What’s not so impressive is the realisation that you will have to hand over your hard earned cash to some of these outfits in order to download the driver you need. But you don’t have to search for your wallet as most of the other programs mentioned here will allow you to download your driver free of charge, albeit with some crapware offerings thrown in for good measure.

Don’t be fooled by the questionable semantics used by some of these solution providers either. Assertions such as low system health status are nothing more than scare tactics designed to assist the unwary in parting with their cash. To put this in perspective, you could find a 64 Gb flash drive on Amazon for roughly the same price being asked by some these outfits to fix your driver issues. Which would you prefer?

In the event that you have installed a device that you can’t identify, help is at hand. This may sound odd, but you may have acquired an older gadget at a computer fair; or indeed you’ve acquired a handed down PC through the family; or you simply like to tinker with older technology and keep your hand in as many do. A very useful program to help identify devices is Everest by Lavalys which will display detailed device descriptions enabling you to search for the driver. Driver Easy also has this very useful function and shouldn’t be overlooked either. By identifying the device, model and version number using one of these programs, it’s a very simple task to add it to a search query with the original manufacturer or in one of the programs mentioned above, but making sure you don’t hand over any cash.

8 thoughts on “Why should you pay for device drivers?”