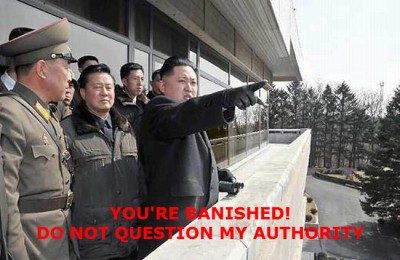 So you want to be a moderator?

Do you know how many would-be dictators are out there, masquerading as forum administrators and moderators? If you have any experience of online forums you’ll probably know that the administrator is the all seeing eye with God-like powers and moderators are their anointed servants with powers only limited by whatever the administrator sees fit to give them. Very often the admin is the owner of the site and the mods are his mates with a clearly defined hierarchy and powers of separation. This often gives rise to the old adage “Give someone a uniform and they become a tyrant.”

Not all tyrants wear a uniform however and the picture above of The Dear Leader administering his own domain serves as a useful reminder that power in the wrong hands can indeed be a dangerous affair.

Probably for as long as the internet has existed, when small groups of like minded people gathered together to throw ideas around and online forums were created, some kind of moderation has been a necessary evil in much the same way as an exam invigilator or referee at a football game will quietly do their job and largely go unnoticed until such time as intervention is required. You don’t generally see footballers sneaking worried looks over their shoulders every time they kick the ball. The entire game is not about the ref; it’s about who plays in the game and the enjoyment of being there. The end result of course is paramount and the very purpose of the game.

An online forum on the other hand, is not normally a game of two sides and winning is not usually the objective, but with the internet being what it is, where light itself can be bent at will, anything is possible.

How to become a dictator

I’m surprised Ebay or Amazon don’t sell DIY Dictator Packs; they’d sure to be onto a winning formula for the budding admin or mod and one can only imagine the set of instructions slapped on the side of the box: apply first thing in the morning and only remove when power is relinquished. The big difference here being that becoming a dictator of some tinpot republic with a slew of extravagant medals stuck on your chest can often be a messy and bloody business. Becoming a moderator however, is a slightly less bloodthirsty task and is very often an invitation only event. Take a look around and I think you’ll find that being a dictator today is de riguer when you consider Maduro (Venezuela), Putin (Russia), Erdogan (Turkey), Mugabe (Zimbabwe), Assad (Syria) not to mention The Dear Leader himself Kim Jong-un (North Korea) amongst many others. What all these crackpots have in common is the ability to surround themselves with yes-men and sycophants, a skill that you, the aspiring admin, will need in your toolbox at all times.

Further dictatorial skills at your admin/moderator disposal should be an intolerance of dissent, questioning of authority and certainly the squashing of any questions relating to your authority as omnipotent leader and holy one. You should also make clear to the minions who dare to inhabit your kingdom that there is a very clear pecking order which is incontrovertible, unquestionable and is carved in stone. Allow me to offer up the following suggestion:

Naturally you are free to tailor the hierarchy of your fiefdom in whatever way that turns you on and it’s also important that each and every visitor is made aware of the rules of engagement without delay. 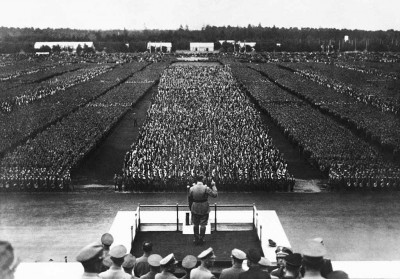 I really can’t stress enough how important this aspect is to the running of your forum as you would wish it to be. No doubt you will have published an extensive list of terms and conditions which will include every known felony that could possibly occur on your watch, thus barricading yourself behind an armour plated steel fortress of impregnability. You may also wish to consider how to carry out sentence on your unsuspecting targets, especially as you know that nobody ever reads terms and conditions anyway, which is the magic bullet up your sleeve, so don’t forget it.

Many experienced and battle hardened admins prefer the aerial smart bomb approach, usually delivered by stealth, thus no warning is ever received. This approach has the added and very delicious effect of never having to look the newbie in the eye as they can be a tad troublesome at times. The belt and braces and coup de grace of course, is simply to banish their IP address into the gulags and be done with it; satisfaction guaranteed, allowing you to sleep at night like any self respecting dictator. Naturally if you are afflicted with an ill advised rash of benevolence, you could always dole out random infraction warnings as you see fit which has the spicy advantage of putting the sh*ts up those who won’t toe the line and gives you the unrivaled pleasure of watching them squirm as fear takes a hold with its icy grip. Some softie old admins even publish a scale chart of offenses depending on their severity and the kind of sentence the offender might expect to receive, but this often leads to resistance and whispering within the ranks and is not usually advisable. However, overuse of the words snail,boat hook, sunshine, white, black (or any other colour for that matter) should be flagged and moderated with extreme prejudice.

Let’s get down and dirty

Remember at all times that the first rule of running a forum is that you are not presiding over some lily-livered democracy. The above extract of T&S illustrates the point perfectly, especially when buried deep in the text so as to be hardly noticeable and from your point of view, brings the concept of three strikes and you’re out to a whole new and mouth watering level.

For added effect, you may also wish to include the following  short but sweet veiled threat in your conditions of service; after all, you wouldn’t want the great unwashed thinking for themselves, conspiring with one another and running off to cry at mummy’s apron strings would you?

So, now that we’ve established two key points, that is, questioning any aspect of The Rules openly  on the forum and that PM’s do NOT belong to forum members, you as administrator will have consolidated your position in one fell stroke through the much maligned tool we know as fear. You see, the medicine you are handing out may be bitter at first, but like sheep in a corral, you’ll find that acquiescence will eventually reign supreme, mark my words.

Some admins go it alone and choose the lonely path of leadership but many take a leaf from Col Gaddafi’s little black book and recruit a small but compact team of moderators, none of whom need to be actual virgins or Amazonians of course, but you get the idea. In this case it’s vital that each is given a clear incentive to wield the sword of Damocles in the form of regular ego boosts, gold stars or if you’re feeling particularly generous, a new title such as Global Moderator or any other such fancy title. Rest assured that they will wear those medals with pride and gusto and remain loyal like the lapdogs you wish them to be. Encourage them to inject keywords into the moderation list so that your subjects are constantly kept in the dark and on their toes. You know it makes sense.

Post and like counts are the currency of the forum and the surest way to keep your members on their toes is to dangle a ban over them, with the additional penalty of a post count reset. You see, serial posters wear their post count as a medal of honour in the same way that you the mod wear your title with pride. The big difference here is that only you can zero their post count and reduce them to the humiliation of newbie status at the flick of a switch. 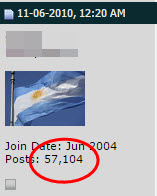 A vile and pernicious question if ever I heard one. Of course you’re not a ; you’re simply following orders and ensuring that your followers are only exposed to information that you want them to see. As author of this piece I’m squirming with delight at being able to share with you some golden nuggets gleaned from a forum which shines like a beacon in an otherwise tawdry landscape of pseudo democracy, in a land which has had it’s fair share of flirtation with that very noble ideal.

Naturally some of these screenshots have passed through the board of and thus have been rather spoiled, however it’s not difficult to see the onerous task our friend at admin has on his hands and one has to wonder at his patience and understanding. One only has to peek at the kind of questions our overworked and undernourished admin has to fend off on a daily basis to realise that some forum members simply won’t take no for an answer. 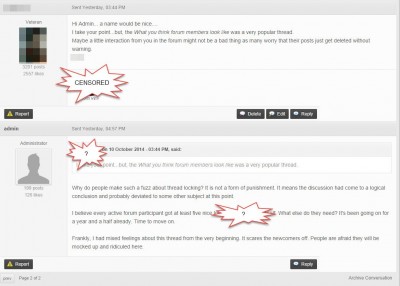 But if for one moment you were to stand back, look at the bigger picture and be reminded of the words of Charles de Gaulle “Silence is the ultimate weapon of power“, you would shudder at the thought of that weapon being used against you wouldn’t you? After all, your very existence as an admin/mod is only propped up by the very audience you pretend to serve and if indeed the weapon of silence did strike in ever deafening waves you’d very likely find yourself sniveling in a lonely corner of your crumbling kingdom asking yourself where it all went wrong.

Well, you’d have to ask yourself one question.

Do I still want to be a moderator?

9 thoughts on “When Does Forum Moderation Become Censorship?”