When you tap that icon on your phone, tablet or desktop, are you remotely concerned about which operating system you are using?

Most people are not and the fact that Windows, Mac IOS, Android and Linux achieve the same goal, is indicative of how the battle lines have blurred in recent years, spurred on in no small measure by we, the consumers.

Of course, it would be churlish in the extreme to presume that we didn’t fall into camps with Winbox snipers taking aim across at their counterparts in the Mac and Linux camps. After all, wasn’t Steve Jobs himself an original perpetrator in the Macintosh and Lisa struggle?

But sometimes, isn’t it a little exotic and maybe a little daring, to take a peek over the wall and catch a glimpse of all those happy little bunnies running around in the golden sunshine with gay abandon?

Yes it is and with that thought, I threw all caution to the wind and put any thoughts of Windows behind me

To install or not?

Linux is packaged in numerous tasty desktop flavours or distros, including Ubuntu, Fedora and Linux Mint, to name just a few.

The main advantages of these distros are that they are free to install and use; are not prone to virus infection and can be run live from a DVD before you decide to install.

Of course, the first step will be to download the ISO from here LINUX MINT and burn it to a DVD so that the computer can boot to it.

Using the very popular Linux Mint 16 as an example, here are three different ways to proceed:

If you simply want to test the operating system without making any changes to your current set up, ensure that your PC is configured to boot from the CD/DVD by making the necessary change in the BIOS boot order. Once the PC has booted to the Linux Mint desktop, feel free to poke around as you would with any operating system, bearing in mind that it will not be lightning quick and you won’t be writing anything to disk due to the preview nature of running it from a DVD.

To get the full benefits of Mint, you’ll need to install it as a standalone operating system on a clean hard drive or alongside your current Windows set-up. Both these options are very straightforward, pain free and require very little technical input on the part of the user. Both methods are very similar, with the latter giving you the opportunity to choose partition sizes, and you will need to use the GRUB boot manager when the system boots up, giving you the option to choose from Windows or Linux Mint. 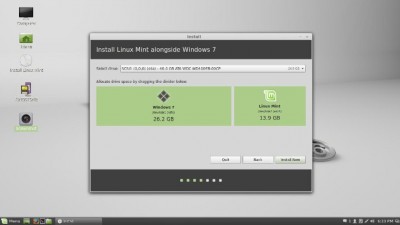 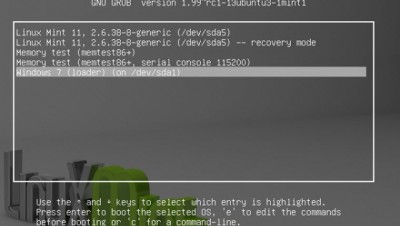 Installation is a breeze and takes no longer than a Windows install. 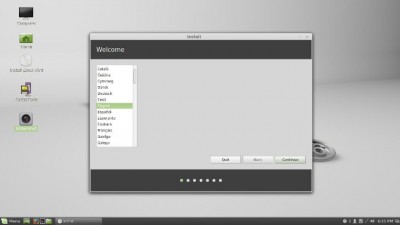 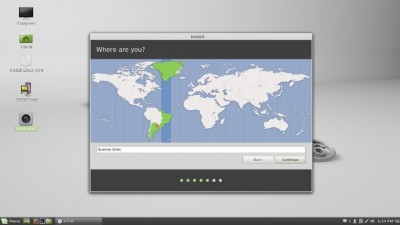 I believe there was a time when Linux users were considered by some to be pipe smoking vegetarians who lounged about all day in cardigans and leather sandals contemplating on the meaning of life.

Personally, I never fell for that one, and either way, who cares? What you get out of the box, totally free of charge, virus free and very quick, is an operating system that’s capable of doing practically anything a Windows box can do, headache free.

Desktop computing has changed in many ways in recent years and tasks have become simpler. Many of us now save our files in the cloud and sync them locally to our PC’s. If we are sent a document in Word, Excel, PDF or other such format, in many cases we can open that document online using Google Docs, Office Online and a number of other services.

Of course, much depends on what you wish to achieve with your computer. If this is simply a case of creating basic documents, emailing, social networking and keeping up to date with the world, Linux is more relevant now than it’s ever been.

I mean, for a truly polished operating system, free of charge and virus free, it’s hard to beat.

This article was never meant to be an in depth technical review of Linux, but more a hands on first impression from a dyed in the wool Windows devotee, who also happens to be a gamer.

Gaming is one aspect of Linux which I assumed would be a problematic affair, requiring tweaks, patches and endless alchemy.

But in this, I was pleasantly mistaken and found that the dark art of gaming in Linux is not emulation at all and for anyone who has ever tried to run a 16 bit application in a virtual machine, that may sound familiar.

It’s all down to WINE you see, which is not an emulator. Source: WINE .

By downloading the WINE package to your new Linux Mint installation, what you get is is a compatibility layer capable of running Windows applications, without loss of performance.

And it gets better; install Play On Linux and you get a graphical front end for WINE, which supports hundreds of games and other Windows applications, allowing you to install all your favourite Windows programs and run them in real time. Source: PlayOnLinux

Installing windows programs and games is a very simple affair, with wizards and hints to guide you.

Hardware support for Linux is also a major factor for considering it as a contender for your desktop. Both AMD and NVIDIA roll out updated Linux drivers on a regular basis, just like their Windows counterparts. Of course, there are countless other hardware and driver configurations that need to be considered, but for the purpose of this article, it’s sufficient to point out that I encountered no problems whatsoever.

Would you cross over?

I’m lucky enough to have numerous machines to play with in the workshop, which in itself may sound like a cop out, as making the leap and using Linux as a main machine may not be entirely necessary, as I intend to use it as the front desk PC for handling day to day tasks.

However, I wouldn’t have any reservations  at all about dual booting Linux Mint and Windows 7 on my main rig. The desktop interface is clean, simple and easy to use. It bears a striking resemblance to Windows 7, especially in terms of desktop navigation and you get exactly what it says on the can.

Numerous excellent articles have appeared here on DCT regarding the soon to be phased out support for Windows XP; where to go after XP and how to manage your XP set up once the official Microsoft support has ended.

The choices are pretty stark and most involve handing over wads of cash to Microsoft; but there is another way and it’s Minty.

20 thoughts on “Wake up to that fresh, Minty taste!”