When I wrote about upgrading to iOS 6 a few days ago, I wrote that one of the  new features that I was looking forward to was Apple’s new Maps app.   OK, occasionally I’m wrong and this is apparently one of those times. 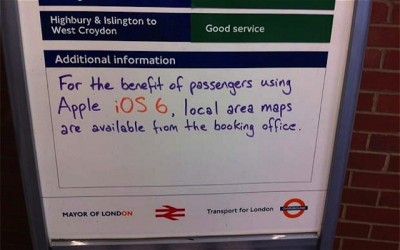 The Maps app is plagued by missing towns, inaccurate local business information and a veritable lack of support for public transit.

While there is a public transit icon in the Maps app, all it does is bring up a list of Routings apps, priced from free to $49.99.  You need to purchase and install one of these apps.  Once launched, the routing app works entirely outside of the Maps app.  The only ‘integration’ with the Map app is that, the next time you select public transit, the app that you purchased shows up at the top of the Routing Apps list.  If you need public transit, why use the Maps app at all? Wouldn’t it just be easier to go directly to the routing app? The ‘old’ Google Maps app (that everyone wishes was back) included detailed information, including bus schedules, when providing public transit information.

As reported by The Telegraph, Apple spokeswoman Trudy Miller said:

We launched this new map service knowing that it is a major initiative and we are just getting started with it.

There were some complaints with the iPhone 4S launch last year that Siri was still in beta.  Well, beta for Maps would look pretty darn good about now.  From the sounds of it, this is barely an alpha version. When you replace any app, especially a highly-regarded one, the new app should at least do as much as the original app.

It seems that Apple has to have a controversy with pretty much each product launch.  The Maps app debacle is being referred to as Mapgate and Mapageddon.  The pity is that for all of the things that are done right in iOS 6 (and there is a lot), it all gets lost in the one thing that was released before it was ready for prime time.

Apple is Apple and that means that it will, one day, make the Maps app into the stellar app that it was conceived to be.  It’s just not there yet.  Maybe iOS 7?