In 2008, Google and T-Mobile USA unveiled the T-Mobile G1, the first cellphone to feature the Android OS. 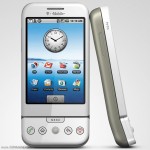 The G1 featured version 1.6 (Donut) of the Android mobile operating system. It went on sale the next month, priced at $179 for a two-year contract.

Priced at $399, the WorkPad was based on PalmPilot technology and featured 1MB RAM.