Today we’re going to be talking about the very complex and necessary Windows Registry, and whether you should Clean, Defragment or otherwise manipulate it.

The first thing I want to make very clear at the outset of this discussion is that I do not advise anyone, particularly those who are not intimately familiar with the registry, to modify, clean, defragment, or otherwise tamper with it. It is a vital component of the Windows operating system and corrupting it in any way may render your computer useless.

You have been warned. For those of you out there who insist that cleaning and/or defragmenting the registry will garner great improvements in responsiveness and performance, then let us proceed.

One caveat to which I beg you to adhere: Back up your Registry before making any changes. You will thank me later when things go wrong.

The Windows Registry is nothing more than a huge database that is maintained by Windows and Applications to store their respective configuration data. The registry is made up of three basic elements:

If you open the Registry Editor, you’ll get a clearer idea of what I’m talking about. You can do that by clicking the Start button, typing regedit.exe, and hitting Enter. You’ll get something similar to this: 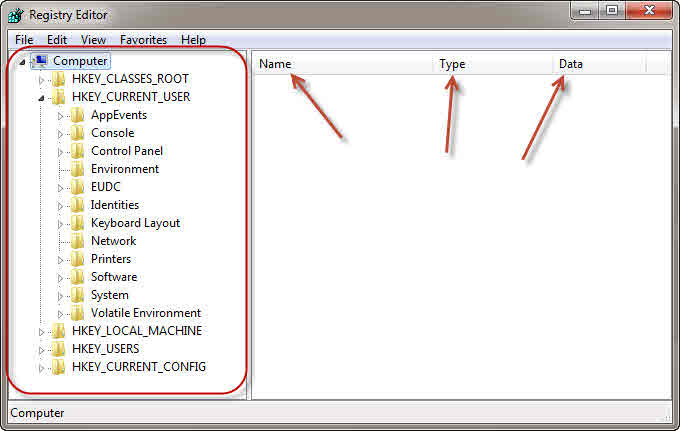 You’ll see right off the Keys are listed in the left pane, while the Values and Data are listed under the Name and Data columns in the right pane.There are five predefined ‘Hives’ in the Windows 7 Registry (older versions had a sixth Hive called HKEY_DYN_DATA) listed as follows:

Backing Up Your Registry

If you’re going to tinker around in the registry, it is all-important that you make back-ups. If you make a mistake, it is possible to mess Windows up to the point it will have stability issues, or in the worst case scenario, it won’t boot at all! If this happens and you don’t have a back-up, your only recourse is to either use your Hard Drive backups/images (which you have faithfully maintained, right?) or do a fresh installation of Windows which is no fun at all.

To do a complete, clean Windows 7 installation including all my drivers and programs takes me up to several days, not hours. With a current backup the same thing can be accomplished in under an hour.

To make a backup using the Registry Editor, click the File Menu and choose Export. A new window will open giving you the opportunity to choose a File Name and Location for your backup. This should be done any time before you are ready to make Registry changes.

You may back up the complete Registry or only a branch thereof. The choice is yours.

The registry is one of the busiest places on your Windows System. It gets accessed hundreds of times per second and its maintenance is crucial to a smoothly-performing computer.

Ideally, well-behaved applications clean up after themselves when they are uninstalled. The sad truth is that many remnants get left behind over time causing the registry to become bloated with a lot of dead weight. This is one of the main reasons I hate Adobe Acrobat Reader, and its ilk. They leave so much cruft behind as to be a mass of, well, you know what…

This brings us to Registry Cleaners and Registry Defragmenters (some utilities do both). Some are quite aggressive, however, and I don’t recommend them for the casual user. They can and do sometimes mess things up. Therein lies the beauty, strength, and weakness of computers; they excel at doing repetitive tasks very fast. Unlike children, they do what they’re told.

Exactly what they are told. They have no conscience. They don’t care if it is right or wrong. A million errors per second, blindly executed. All is well…

A Registry Cleaner drills down through the registry’s hierarchy looking for all sorts of things that don’t belong there such as empty keys, outright errors, links pointing to nowhere, file extensions that are no longer in use, and so on by the thousands. Once it has compiled a list you will be given the option to delete them.

It is very important that you don’t allow these programs to delete whatever they deem deletable – some of their ‘deletable’ choices may be crucial to the operation of your applications or Windows itself, which will “break” and you’ll find yourself in the unhappy situation of re-installing them. Not a good thing.

A Registry Defragmenter works pretty much like a hard drive defragmenter except in this case it finds all the “holes” left behind by the Registry Cleaner and “closes things up”. This has the effect of shrinking the massive size of the registry, which in turn, theoretically at least, speeds up your computer.

I say theoretically because if you were to take the time to benchmark your system before and after a registry defragmentation session, you probably wouldn’t notice any increase in speed. The risks far outweigh the potential gains.

There are many such utilities on the market, both free and commercial, and I won’t name a single one. They can all cause more damage than they fix and it purely and simply is not worth the risk. Windows 7 in particular has evolved into a robust system that takes care of itself quite well, thank you very much.

I think I have made my opinions regarding Registry Cleaners and Defragmenters quite clear. There will be some people out there who insist that these utilities do a great service. To those individuals, all I can say is that we will have to agree to disagree.

17 thoughts on “Registry Cleaners – Are They Good for You?”