Twitter recently introduced several new features designed “to make photos on Twitter more social”, including the ability to ‘tag’ people in photos. This means your name can be ‘tagged’ (or associated) with any photo, regardless of whether you actually appear in it or not.

I can only imagine how spammers’ eyes must have lit up when they heard this news, and in typical social media fashion, Twitter decided to turn this feature on by default.

Twitter’s Help Page includes advice on how users can remove their name from any photos they’re already tagged in:

To remove your name or username from photo(s) you’re tagged in, tap into the detail view of the Tweet, then tap the ellipsis (•••) and select Remove tag from photo.

You can also stop an account from tagging you by blocking the user. Once you have blocked the user, your tagged name or username will no longer be shown on the photo.

However, if you want to switch photo-tagging off altogether, you’ll need to log into your account and change the default setting.

The first option is enabled by default. Obviously, if you don’t want anyone to ever be able to tag you in photos, you should change that to the last option: 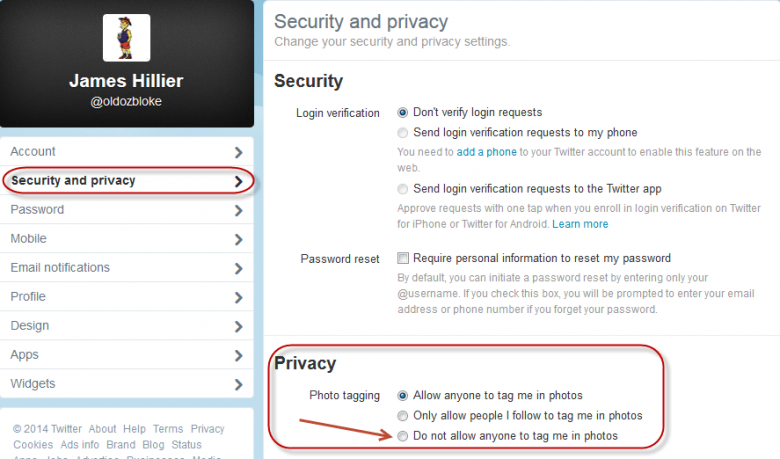 Finally, scroll down the page and click on Save Changes to make it stick.

I can see the rationale behind Twitter adding these new features but I think it’s reprehensible that Twitter made photo tagging opt-out rather than opt-in, enabling the feature by default without its users’ explicit permission or knowledge was the wrong way to go about it.

It would have done Twitter’s reputation a lot more good if photo tagging had been turned off by default and they’d at least attempted to persuade users of the potential benefits derived from turning this feature on. But then, when did social media ever put the users first?