If you are not familiar with the name Piriform, they are the publishers of very popular freeware products such as CCleaner, Defraggler and Recuva. It appears Piriform has revamped its policy somewhat and this is causing confusion among users.

Piriform products have previously been available either as Freeware or shareware Business editions. They have recently included an additional version called ‘Home’ which costs $24.95: 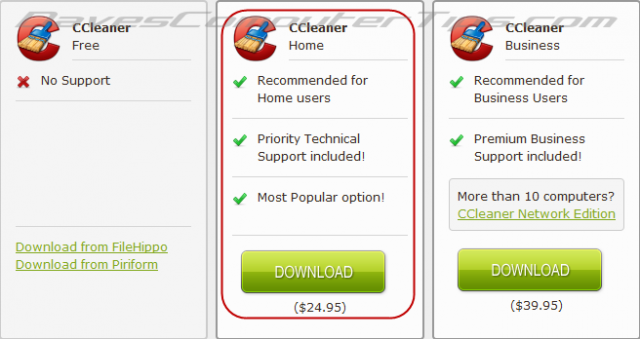 Users are unsure of the differences between ‘Free’ and ‘Home’ and are concerned that the Free edition’s feature set may have been cut down to accommodate the new Home version. As I see it, this is not so and the features remain identical. The Free versions include exactly the same features and only if you want the additional ‘Priority Support’ will you then need to pay $24.95. Pretty similar to a donation system really, except you get a little extra something for your money.

As I said, that’s the way I see it. I have sent off an email to Piriform Support requesting clarification, and I shall confirm my understanding of the situation if/when a response is received.

4 thoughts on “Piriform now charging for their software?”