Agnitum Software’s free security suite has been around a little while now so I thought it was about time to check it out. Please note; I have not installed and tested the software, merely collected and perused a heap of reviews to gain an overall impression. 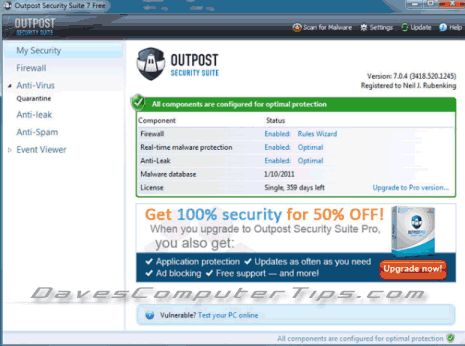 Agnitum Software’s free security suite has been around a little while now so I thought it was about time to check it out. Please note; I have not installed and tested the software, merely collected and perused a heap of reviews to gain an overall impression.

There are very few free security suites available, Comodo’s combination of free firewall plus anti-virus, known as Comodo Internet Security, is the only other one I know of which even comes close. Not that Agnitum’s offering could be called a full suite, only the commercial vendors offer the complete combination of components that would warrant such a description.

Outpost Security Suite Free offers users; a combination of anti-virus and anti-spyware protection, a very good firewall plus an anti-spam component. Agnitum also lists “Safe web surfing” among the feature set but I have been unable to ascertain exactly what that entails.

Are mostly favorable, although they are generally either very positive or extremely negative. There is not much in between and it seems users either love or hate this free security suite. Almost all complaints stem from either excessive resource usage or installation issues.

I am prepared to overlook most of the negative user comments because; I do believe the majority of users who complain about post installation slowdowns may be making the mistake of trying to run a security suite on older machines with inadequate hardware. Similarly, I am guessing that many of the problems reported during and after installation could perhaps be put down to inexperience. Maybe those users still have one or two subsidiary security products installed which are creating conflicts. Or perhaps previous security software uninstalls have not been completed properly and remnants are interfering.

Generally rate the software between ‘average’ and ‘pretty good’, they also provide persistently similar comments on the pros and cons. I generally tend to put more faith in user reviews than editorial reviews but this is one case where I am prepared to make an exception. The consistency of opinions plus assumed higher level of expertise with what is a fairly technical subject matter sway me in that direction.

The anti-virus/anti-spyware component is not quite as effective as some of the leading dedicated freeware such as Avast, AntiVir and MSE. Detection rates are average for pre-existing malware but slightly below par in the real time environment.

The Outpost free firewall has always been highly rated and is generally regarded as the strongest component in the suite, although not completely devoid of issues (but then what 3rd party firewall is). One of the strengths of this firewall is its excellent resistance to direct attack. It is, however, very ‘talkative’ when using the more-secure mode.

The anti-spam component does absolutely nothing initially and requires coaching before commencing its filtering. The ‘training’ involves supplying it with 150 or more verified legitimate messages plus 150 or more verified spam messages. After initial training and as it learns more and more, the anti-spam becomes fairly proficient but still not quite up to the standard set by commercial counterparts, or even some of the better dedicated freeware.

Despite some user comments to the contrary, all reviewers rate the suite’s impact on resources as being ‘light’ and report only minor increases in boot up and shutdown times.

There wasn’t a lot of information re definition updates; the frequency and whether or not they are automatic. So I dropped a line to the Outpost support team and promptly received this excellent reply:

In Outpost Free 7.1 the user can either stick with automatic (by default) regime and receive as many updates as a PRO-version user but a bit slower (greater bandwidth is assigned to PRO version updates), or – the user can hit the “update now” button (manual regime) at any given time and receive an update if it’s available on the server.

Users are most likely going to achieve an overall higher level of protection by installing separate dedicated security freeware. However, the advantages of installing this suite are not without appeal; there is (virtually) zero chance of any conflicts; with the components all coming from the same developer and installed hand in hand they are certain to provide a harmonious security environment. It should also be noted that this Free version includes the best features of the commercial Pro edition, including anti-virus/anti-spyware engines and proactive protection – and rates highly in test results on sites such as Matousec and VB100. There is also a dedicated 64-bit version available.

A feature comparison chart between Free and Pro editions can be viewed HERE.

Users who require a medium to high level of protection should certainly give Outpost Security Suite Free due consideration.