There is possibly nothing more confusing than trying to choose a new or replacement monitor. There are so many different brands and models available, a variety of different panel types and specs to consider, it ain’t easy – especially when factoring in the value for money element.

I’m certainly no expert in this area, but I’ve been researching buying a new monitor for about 4 months now and I’ve learned a lot along the way. I guess I started out like many of you, pretty much bamboozled by all the tech-speak and acronyms involved. I hope this article, basic though it may be, helps spread some light on the subject and maybe lead you in the right direction.

There are four main panel types available, here is a basic explanation of each:

Often abbreviated to “TN”, this is the oldest technology and a relatively inexpensive panel type as well as the most common. Even though TN panels cannot match the viewing angles and color reproduction of superior technologies, they remain extremely popular due to the low cost element.

TN panels are suitable for everyday basic needs and high-end TN panels are also popular among the gaming fraternity because of their comparatively fast pixel response times. With average grey-to-grey* (G2G) transition times hovering around 5ms, and often as low as 2ms and even 1ms, these panels are perfectly suited for fast action gaming.

*There can often be too much emphasis placed on grey-to-grey times – outside of specific gaming requirements, 5ms to 8ms G2G is entirely acceptable.

IPS panels provide superior viewing angles and color reproduction to TN panels, but are accordingly more expensive. IPS panels are generally favored by graphic artists, architects, and photographic professionals, wherever clarity of fine detail might be critical. Earlier IPS models were plagued by slow response times but improvements in the technology have now seen a marked improvement in that area.

High-end IPS monitors almost always include additional adjustability; such as height, swivel, and even rotating 180 degrees from landscape to portrait. However, there are less expensive models available these days which provide a tilt option only.

Overall, with the improvements in G2G times and a falling prices, IPS monitors are becoming a viable alternative to TN.

AH-IPS, developed by LG and first hitting the shelves in 2011, is an advanced form of IPS, boasting brighter and clearer colors as well as lower power consumption. I believe AH-IPS was primarily developed to produce a superior display on mobile devices but the technology is eminently suitable for monitors.

Monitors with AH-IPS panels appear to be similarly priced to comparable IPS models – maybe slightly more expensive at the high-end.

In 2012 Samsung Electronics introduced its PLS (Plane-to-Line Switching) technology to take on IPS panels. Samsung has remained pretty secretive regarding the actual PLS technology but it is reported to be very similar to LG’s IPS technology, and pricing also appears to be pretty much on par.

Samsung claims the following advantages of PLS over IPS: 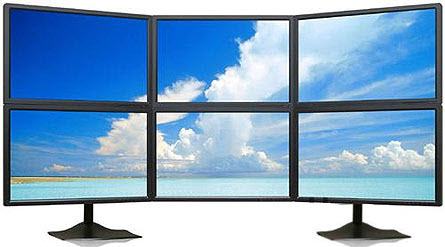 Remember the old Dell 16″ monitors? Sad to say, I remember them well. These days monitors come in a much larger range of sizes, from 19″ to 27″ and upwards. Although, I wouldn’t generally recommend anything larger that 27″ for the average home user.

The important thing to bear in mind with monitor size is that it is generally tied to maximum screen resolution – the larger the screen, the higher the resolution. This is, of course, entirely logical, because the bigger the screen the wider the pixels will be spread. So, in order to avoid a grainy display and maintain picture quality, bigger screens require higher resolutions.

Accordingly, there is nothing wrong with lower maximum resolutions on smaller monitors but you need to be careful as the size increases. On a 27″ monitor for example, even though you’d likely get away with 1920 x 1080, to get the most bang for the buck, I’d be inclined to go with a more expensive higher resolution.

There are three main types of connections involved, VGA (AKA D-Sub), DVI, and HDMI.

As I said, VGA is the default connection type that comes with all desktop computers. Both DVI and HDMI generally require the addition of a dedicated graphic card. If I were looking to buy a new monitor today, I would consider HDMI connectivity as essential. Even if the current PC does not include HDMI output, I would still buy a monitor with HDMI input to cover future eventualities.

Most latest model monitors come with HDMI, if you’re looking at a monitor that doesn’t include HDMI, chances are it is an older model. Most manufacturers include ports for all three connection types but Samsung dropped support for DVI once it started including HDMI by default.

*It’s important to note that not all monitors support all thee connection types so, if you require a specific connection type, make sure to check the specs thoroughly before buying.

Monitors – Built-in Speakers or Not? 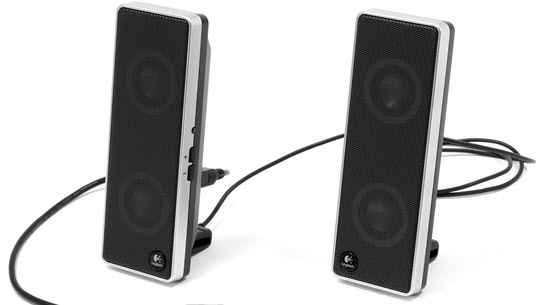 Monitors and speakers are a bone of contention with me, in my opinion ALL monitors should come with speakers built-in. Especially now HDMI is fast becoming the norm, what is the use of including HDMI input without built-in speakers?

I guess from the manufacturer’s point of view it comes down to minimizing costs to help maintain competitive pricing. I can’t believe how much the addition of decent speakers increases the retail price. A basic pair of self-amplified external speakers are inexpensive but can also be an inconvenient option, especially where limited space and/or power outlets is concerned.

There also appears to be a major discrepancy between quality of built-in speakers relative to cost. Look up user reviews for cheaper monitors that include speakers and you’ll almost certainly come across negative comments regarding poor quality audio.

The way I see is as follows; if you are not a gamer, and do not use the PC and monitor for viewing movies, or as a music player, etc, I would opt for built-in speakers. The quality will be good enough for everyday chores and it will generally be more convenient.

If you do tend to use the PC and monitor for gaming, viewing movies, or as a music player, etc. you’ll probably be better off with a superior external audio system anyway. For example, my main PC at home is hooked up to a home theater amplifier with 5.1 surround sound.

I reckon I’ve read literally dozens of monitor reviews, and NONE of them are entirely favorable. As if selecting a new monitor isn’t difficult enough, it doesn’t help when every single review includes criticisms which the reviewer deems important enough to bring to our attention. Sometimes I think these ‘experts’ concentrate too much on the technical intricacies and nowhere near enough on the practicalities.

Personally, when it comes to monitors, I’m an Asus fan… don’t mind LG either. As with most things, you generally get what you pay for, so I tend to steer clear of cheaper, lesser known names and stick with brand name products.

When shopping for a new monitor, try not to leap about all over the place between brands and models. The best way to proceed is to research and select a particular brand and model that meets your requirements and budget beforehand, then begin your comparison shopping.

I haven’t mentioned things like gamma, 8-bit and 16-bit, and many other technical details, but quite frankly, much of that is over my head anyway.

Obviously I can’t recommend which type of monitor you should buy, I have no idea of your specific requirements or available finances. As with most choices, which monitor will best suit pretty much comes down to individual needs, different monitors can be better suited for different purposes, from basic requirements through to professional demands.

However, I hope this basic explanation has helped clarify a few points regarding the various technologies involved and you now have a clearer understanding of whatever might suit your own specific needs.

**Images and prices included in the images are not meant as recommendations in any way. They are merely included for illustrative purposes and to help provide a pricing guideline.

28 thoughts on “New Monitors – Which one is best for you”