I can hear the cries… what already!! Yep already, but I’m pretty sure there is a method behind the madness. The name of the software is RecImg Manager, it works with Window 8 only and comes to us from SlimWare Utilities, the makers of SlimCleaner and SlimComputer.

RecImg Manager is a new way for users to restore and reinstall their entire Windows 8 Operating system and software in minutes without losing personal documents or files.

Restore: RecImg Manager reinstalls only Windows 8 and your software, which means documents, videos, music and other personal files remain untouched and intact – nothing is lost.

As you can see from the above blurb extracted from the home page; RecImg Manager is designed specifically for creating and restoring images of a Windows 8 system, including all installed software but excluding personal data which remains intact… what is often referred to as ‘non-destructive’.

But doesn’t Windows 8 include ‘Reset’ and ‘Refresh’ features which already do this? Well, yes and no. The ‘Reset’ feature is actually a destructive option which allows users to wipe the slate clean and start again entirely from scratch – very much like a ‘restore to factory settings’ feature. The ‘Refresh’ feature does offer functionality similar to RecImg Manager but with one important distinction; ‘Refresh’ in Windows 8 preserves Metro-style apps only, not desktop apps. Whereas RecImg Manager claims to preserve all installed programs. I believe ‘Refresh’ also preserves a number of key settings but not file associations, display settings and security settings, which are restored to factory defaults. On the other hand, because RecImg Manager creates an exact image of the system it should retain all settings.

I haven’t tested the software at all, because I don’t have Windows 8 installed anywhere – something I’m hoping to avoid until work commitments dictate otherwise. But, while there is no doubting the appeal of smaller image files minus personal data, reading through all the available information I can see no mention of any sort of bootable media. Apparently, RecImg Manager will only work from within Windows, through the software’s interface. This means that there is zero provision for disaster recover – when a machine will not boot. 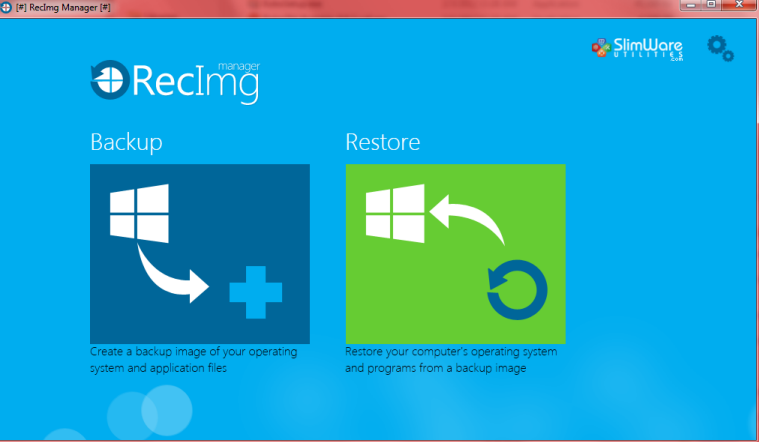 To me, this is a major omission and one which seriously diminishes RecImg Manager’s viability… which brings us back to the “method behind the madness” theory.

Why publish this software now, months before Windows 8 is due to be released for general consumption? I suspect that SlimWare’s plan might be to see the free software firmly established prior to releasing a shareware version down the track with more features and enhancements, in a ‘Freemium’ type distribution model.

UPDATE: Just received this response from SlimWare to my inquiry regarding bootable media:

Boot-able media will be released near the final Windows 8 release at the very latest. We are still collecting feedback on that.

Even when I eventually end up with Windows 8 installed, I seriously doubt RecImg Manager shall replace my current choices in imaging software, on the proviso they support the new operating system of course. The smaller images can easily be achieved by maintaining system/program files only on the primary ‘C’ partition and isolating personal data on a secondary partition. That said, I guess it will all depend on what features might be added between now and then, plus whether or not RecImg Manager remains free… and if not, how much! It generally comes down to the bottom line, does it not?

If RecImg Manger does in fact remain free and  ends up including a feature to create bootable media, well that would be an entirely different kettle of fish.