Upgrade To An SSD

With the price of many premium brands of Solid State Drives (SSDs) nosediving, perhaps it is time to investigate what an SSD can do for you. Upgrading to an SSD can feel like adding an additional 600 HP to your car. I say “feel like” because it just gives you faster access to your data.

How Does It Do It?

The increase in R/W speed is one reason, but the ability to increase your HD’s I/O is another, but the biggest is disk latency. It is what makes the computer appear so much faster. Even if you are just browsing the internet with your computer, the constant I/O’s created because of everything required by your OS on your HDD is enormous. According to the Microsoft (MS) Core Team, “We can define disk IO latency as a measure of the time delay from the time a disk IO request is created, until the time the disk IO request is completed.”

The longer it takes for a disk to recognize a task, the longer it takes to start a read or write.  In the graphics below, the first is a comparison average Read/Write Speed for an HDD on my system against an SSD. 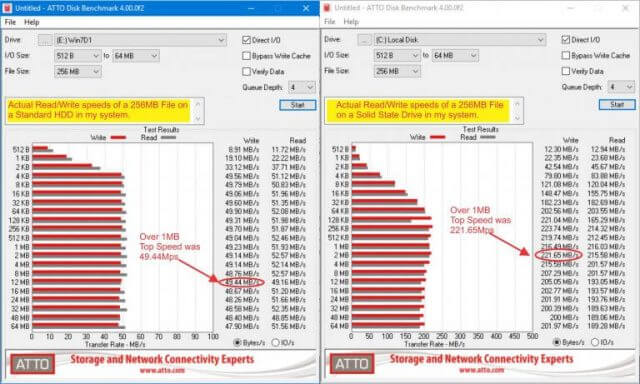 The next graphic was created to measure the transfer of a 4.8GB file and to show the difference in response time. 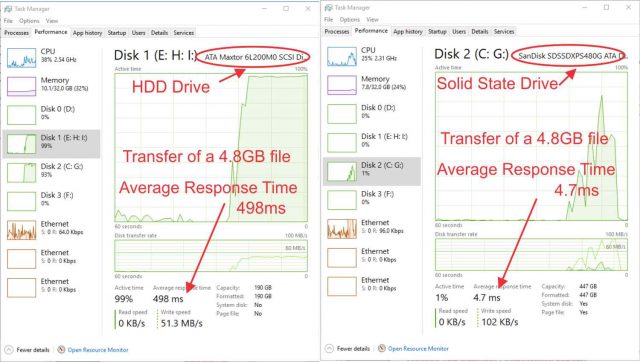 If you have at least 4GB of memory, upgrading to an SSD is the best way to maximize your computer. The price-drops on these drives have been incredible for the typical user. The Zheino SSD runs around 21 cents per GB. It offers a 3D Nand and R/W speeds of 510/440 MBps. It comes with a 3-year warranty. An addlink S20 3D NAND SSD 1TB is only 11 cents per GB and provides sequential R/W up to 560/510 MBps. It comes with a 5-year limited warranty. These are just two examples of many competing drives that sold for 75 cents per GB in 2014.

There are some reasons for these price drops but the biggest is the introduction of 3D Vertical NAND. Think of it as building high-rise apartment buildings instead of individual housing on a block. You can increase your capacity without having to increase your area. Higher capacity drives are cheaper which automatically reduces the desirability of low capacity drives making their prices drop accordingly. The technology is a few years old but manufacturers still held on to higher prices. Now the dam is broke and there is no going back. With a one Terabyte Sandisk SSD available for $125 it won’t be long before all new builds will only be delivered with SSDs.

Another benefit is life expediency. In the past, there were questions about their reliability and lifespan but honestly, that is just not a problem anymore.  The mean time between failure rates has surpassed HDDs with even low-end models advertising 1 billion hours. (that’s 114 years by the way) Higher-end models can top 2 billion. The benefits don’t stop there. They only draw 2-3 watts, about a third of traditional HDDs and they can increase a laptop’s battery life by 30%. SSDs have no moving parts– this produces less noise, and the lower power draw means cooler operation.

Typical HDDs have an R/W between 40 and 120 MBps while older HDDs tend to run even slower  A fragmented HDD can have very high latency. SSDs, however, have a sequential start R/W of around 500 MBps minimum with expensive models performing even better and with exceptionally fast response time.

What Can You Expect To See?

Even with the higher speeds all around, it is hard to say exactly how much improvement you will have. If your current HDD is performing like new, the new SSD will still show a marked improvement. On the other hand, if your HHD is on its last leg, and you purchase an SSD, you will be amazed.

I have not had a single complaint from any of my clients. Every owner has remarked about the “new feel” after the upgrade. Average boot times were between 30-40 seconds before and about 12 seconds after.

If this article has piqued your interest and you decide to purchase a new SSD for your computer you might be wondering, “Now what?”

There is no doubt that installing an SSD can make your computer feel brand new again. Just having your computer boot up three or four times faster will do that. In Part 2 I will be covering the methods of installation and possible pitfalls.

Food for thought: Seagate offers a 15TB SSD that provides sequential performance up to 2.1 GBps. That means that if they can already produce SSDs with performance times four to six times the current personal installations, it is only a matter of time before they are available to everyone. We will just have to wait until their price of $10,000 drops.

The following is just for number junkies like myself– Seagate unveiled their 60TB drive four years ago. Only 17 of them are needed to create a Petabyte (PB). If you are interested in numbers and comparisons like I am, this link will show what a zettabyte is and a lot more. Just five Zettabytes can hold all the words ever spoken by human beings?

Part 2 of this article will hopefully answer all the technical installation questions you might have.