In this article from November 2015, How is Social Media Affecting Elections?  I referred to Donald Trump as The King of Social Media, for no other reason than he seized on the power of an inflammatory Tweets, as a wide-eyed child might grasp a shiny new toy.

As the seemingly never ending 2016 election campaign swung into a full on, in-your-face media frenzy, the Tweeter-in-Chief circumvented all of our traditionally perceived ideas of US elections in the manner of a great white shark parting the tempestuous waters before him to gnash his way to those hallowed portals of The White House.

Regardless of your political views and with the US elections of 2008 and 2012 being permanently carved in stone as The Facebook Elections, there seems little doubt that 2016 will be remembered as the year Donald J Trump wrung our collective necks, beat us over the head with his Twitter account, then stood back, rubbing his size-challenged hands to watch the fallout. His followers now exceed 25 million, he has a similar amount of Facebook likes and millions of followers on Instagram and other social media outlets. The truth is, that today if you want to get your message across, it has to be instant, direct as an arrow and the 45th President of The United States appears to have found the perfect tool. It sometimes occurs to me that maybe Twitter is the app that was  tailor-made especially for him, even if he so often uses it as would a petulant child, throwing his toys out of the pram.

It ain’t what you do it’s the way that you do it
And that’s what gets results. Bananarama

I’ve always been a great believer in the above sentiment, but Trump, even by most people’s interpretation of free speech in social media, has literally turned convention on its head, by ripping up the rule book and throwing it to the baying dogs roaming around Pennsylvania Ave. The very idea that less is more is clearly anathema to him, when instead of stroking our indignant sensibilities with a feather, he prefers to crash through the barn door like a raging bull.

December 24: Vladimir Putin said today about Hillary and Dems: “In my opinion, it is humiliating. One must be able to lose with dignity.” So true!

It’s a sad state of affairs when we are judged by our social media footprint, but that’s the state of the real world today. The likes we receive, the number of followers we trump (sic) to the world, have become more significant than our actions. Take a look at these figures: 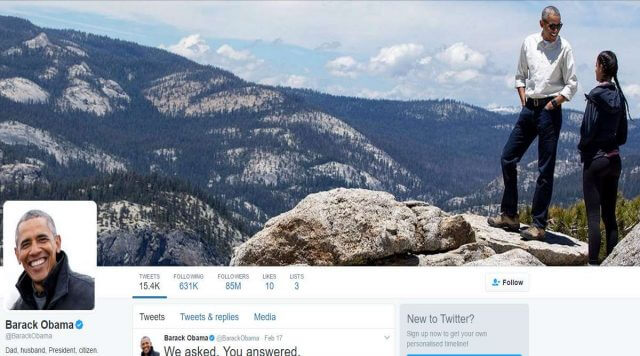 I’m not a statistician, so I have no idea how Tweet numbers relate to the number of followers, but it’s interesting to note that the so called Twitter-in-Chief only just makes the Top 50 in the unofficial Twitter Followers Ranking Table, behind CNN, The New York Times, BBC Breaking News, CNN Breaking News and that old perennial favourite, Kanye West, whoever the hell he is. A crude statistical deduction might lead one to believe that Tweet numbers don’t necessarily translate to number of followers and vice versa. Breitbart News, for example has 640,000 followers, yet has emitted over 74,000 Tweets, so it’s not necessarily what you say, but maybe how you say it.

My own view of social media is a tad jaded as I tend to see it as Munchausen Syndrome where the condition manifests itself as an attention-seeking personality disorder, in which an emotionally immature person with narcissistic tendencies, low self-esteem and a fragile ego has an overwhelming need to draw attention to her/himself and to be the centre of attention. It’s for this reason, and the fact that I lean towards an addictive type personality, that I don’t and never will use Twitter. I’ll look at it from afar, sure, but will never join in the same way that Groucho Marx once said “I don’t want to belong to any club that would accept me as a member…”

I had always considered Twitter to be a portal for out of touch B-List celebs to salve their guilty consciences but no, one Tweet will now whizz its way around the world in milliseconds, where we the recipients become aware of the most powerful man in the world’s trigger happy thoughts. People take notice of pronouncements by powerful people; that’s the whole idea and even if you don’t have a Twitter or Facebook account, you’ll sure read about it somewhere in your connected life as it’s practically impossible to avoid, unless you live on a rock in the Roaring Forties.

Media is an incestuous business, by virtue of the fact that what is Tweeted or Facebooked (sic), will multiply exponentially as it’s reproduced ad infinitum across the online universe.

Now, if I were a true intellectual or maybe even a psychoanalyst I’d probably be able to decipher what’s going on here (above), but I fear that I cannot. Once a Tweet is Tweeted (barf) it’s too late, it’s gone and it’s out there to be taken apart, disseminated, analysed or spat upon, depending on your fancy. But it’s also worth asking whether the law of diminishing returns comes into play at some point. followers will hang off your every word, whilst others will mark subsequent ejaculative outbursts from serial Tweeters as just that; more talk and no substance. The difference with Trump being that he has a tendency to follow up with actions, a trait not often found in Tweeters.

Down here, South of the Border, we were treated to similar waves of Tweets by the now ex-president of Argentina, Cristina Fernández de Kirchner (now facing numerous indictment charges for corruption), most of which  became a huge source of entertainment for those of us who didn’t support her, but looked forward to her outbursts. An obtuse kind of schadenfreude if you like.

There were others of course, most of which needed to be deciphered Enigma-style, such as the occasion when she said “If anything happens to me to me, look north…”, the implication being that unknown forces from the USA had her in their sights and if she were to be struck by a bolt of lightning, it would be because of the Yankee Imperialists. How we laughed and guffawed at her hubris.

But The Donald Tweets from the hip, there’s nothing enigmatic going on here and generally are in the style of what you see is what you get. In an interview with The Times and before he was inaugurated…

So I’ve got 46 million people right now – that’s a lot, that’s really a lot – but 46 million – including Facebook, Twitter and ya know, Instagram… And the tweeting, I thought I’d do less of it, but I’m covered so dishonestly by the press – so dishonestly – that I can put out Twitter – and it’s not 140, it’s now 140, 280 – I can go bing bing bing…it’s very precise, actually it’s very, very precise – and it comes out breaking news…

Clearly numbers are important to the president, which is to be expected from a social media icon, but tweets such as this beg the question… why?

Anyway, I still don’t think I could trust myself with a Twitter account, unless of course I were to become the first British president of Argentina, in which case it would be mandatory. But wait, I need to run as I have a speech to prepare for the White House Correspondents’ Association dinner, but that’s another story.

7 thoughts on “Is Donald Trump The King of Social Media?”