What is a Bottleneck?

A bottleneck, when talking about computer hardware, and not your favorite rustic libation, refers to the slowest device in the system. That one piece of hardware that is bogging down everything else.

Your hard drive is a typical example. It is almost always the slowest turtle in the race. In fact, nothing much happens until it can deliver the bits of information the CPU needs to actually begin doing something. You have probably noticed that some of your big applications take a long time before anything happens– you can most likely blame that on a slow hard drive. Not always, though…

The same situation holds true for every component in your computer. Basically, your computer is only as fast as its slowest component, whether it be your Central Processing Unit (CPU), the Graphical Processing Unit (GPU), Random Access Memory (RAM), and/or the Front Side BUS (FSB). All of them have to work together by passing along and processing information at a speed that isn’t too fast for any other single component. This can be a tricky piece of electronic real estate to traverse.

Today I just want to focus on the CPU and GPU issue. Many lucky people will be getting a state-of-the-art game for Christmas. Some of the luckier ones will also receive a brand-spanking new graphics card, too. As wonderful as the prospect may sound, it could lead to unforeseen problems.

How to Determine Which One is the Culprit

I’ve seen this question posed at forums and web sites I visit and it keeps getting asked over and over again. For years now.

The question will go something like this: “How do I determine whether it is my CPU or GPU that is bottlenecking my system?”

They will then list their computer components. <– this is their mistake because then, these are the types of answers they get:

“Your system is fine the way it is.”, or “Your GPU should be upgraded.”, or the ever-present Troll will say, “That computer is crap!”.

None of the above responses answers the original question. The poor guy/gal wanted to know how to figure it out for themselves.

Well, I’m here to show you the simplest, easiest way I know to do just that.

The numerous variables involved don’t allow for a neat Golden Rule chart– the astounding number of possible combinations prohibit such a thing.

You could do an Internet search for your CPU/GPU combination but if your current hardware is mismatched then finding such an article will be difficult. Tech writers tend to post articles about great hardware combinations, not poor ones.

Fortunately, there is a very simple solution and you only need to download one marvelous little tool called FRAPS. (FRAPS is an acronym for “Frames Per Second”.) 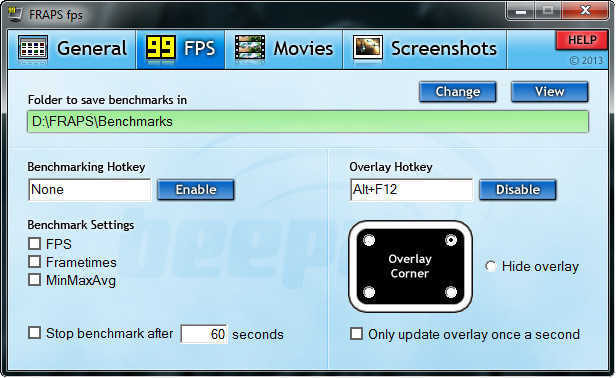 FRAPS is a small utility that I have used many times over the years. It is a small, free download that installs in seconds. Here is where you can find it: FRAPS Home Page

Note: This is off the top of my head but, if I remember right, anything less than 30fps is going to start looking like a fast slide show instead of a smooth, flowing video image.

In any case, if you are seeing sub-par Frame Rates, lower some of the graphics settings in the game. Anti-aliasing in particular, will cause some big performance hits. Take note of your changes so you can return them to the original status if you need to.

I think the best approach is to avoid changing a whole bunch of things. Just pick one, lower it, and test again. It’s much easier to keep track of things that way.

Now, here’s what you’ve all been waiting for…

A Word About Vertical Synchronization (VSYNCH)

VSYNCH may be a setting included within your game settings. It will most certainly be included in your graphics driver settings. I won’t go into technical details, but basically VSYNCH keeps your GPU from sending image frames to your monitor faster than it can display them. There is no worry about physical damage to your monitor, but it may cause a lot of irritating visual ‘tearing’ to occur if VSYNCH is disabled.

The reason I bring this up is that if you have a monitor that runs at 60 cycles per second (Hz), then the maximum frame rate you can expect in games is 60 per second. The same upper limit will match your monitor’s refresh rate whether it be 60, 75, 120 or even higher. The whole point is that I don’t want you to expect 80FPS on a 60Hz monitor. It ain’t gonna happen with VSYNCH enabled.

I turned off VSYNCH in Skyrim one time as an experiment. The frame rates jumped to an unbelievable 120+ on my 60Hz monitor. The quality of the images also tanked so badly that it was unplayable. Man! It was ugly!

Sometimes, the simplest answer can be the most difficult to find on the Internet. I find that a tad odd. This seems to especially occur on forums where you’ll receive all sorts of convoluted answers that may or may not address the original question. I’ve wasted many hours scouring these sites and find it most irritating. Personal experience, commonly known as the school-of-hard-knocks, can be an equally painful and lengthy process.

There are literally thousands of possible combinations when it comes to computer hardware and I’ve only barely touched one of them.

I wish you all a safe and loving holiday season,
Richard