Despise the Start Screen? Long for the days of Windows 7? Not a fan of change? Wonder who put the Metro in Metro interface?

Have no fear! With the introduction of Windows 8.1 Microsoft has provided an option to bypass the Start Screen and boot straight to the Desktop! 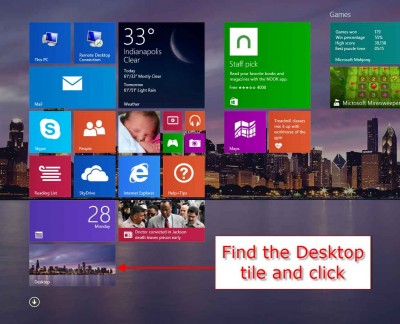 Locate the Desktop tile on the Start Screen and click it to go to the classic desktop.

Find an empty area of the Taskbar (an area with no icons) and right click, which will cause a menu to appear. In the menu left click on Properties. 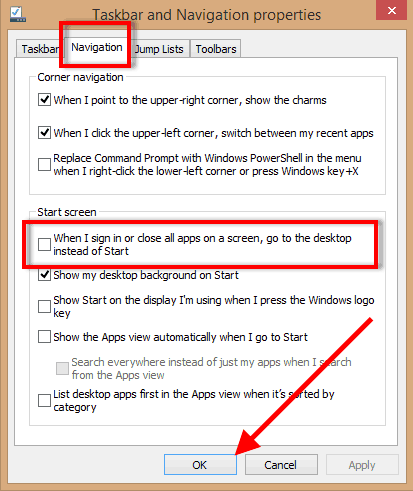 This will open the Taskbar and Navigation Properties menu. Click on the Navigation tab at the top. Although it isn’t as clearly stated as possible, click the box to the left of When I sign in or close all apps on a screen, go to the desktop instead of Start to place a check mark in the box. Click OK at the bottom to accept the change and close the menu.

You have now concurred the Start Screen. Reboot your PC and enjoy the glorious fruits of your labor.

OK, it isn’t perfect, so don’t get too excited. This does not restore the Start Menu from Windows 7, Vista, XP, etc if that’s what you were hoping. It does, however, skip the Start Screen upon boot and generally bypasses it for everything except when you click on the Start Button, or run a Metro app.