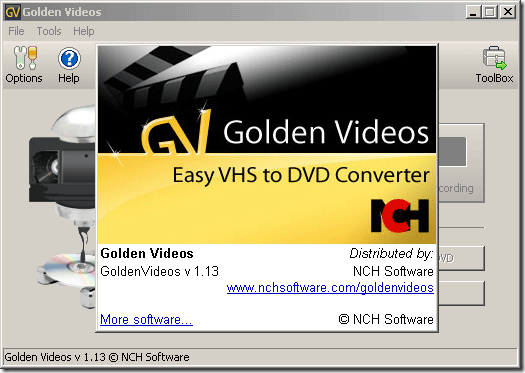 Having read Terry Hollet’s article How To Use EasyCAP TV Capture – Windows 10 the other day, I was prompted to resurrect my own VHS to digital setup to see if I could improve my rather lacklustre attempt. I had previously been running with Windows XP, an Encore TV tuner card and capturing with Windows Movie Maker quite successfully, albeit in WMV format which needed to be converted to MP4 later on. The trouble is that Windows XP can be very unstable, particularly with device drivers. In fact, yesterday when I fired up the system after a few months of not having touched the PC, I was met with this irritating message:

At that point, I realised that it was time to back up, nuke the PC, install Windows 10 and buy a compatible video capture device– which is exactly what I did thanks to Terry’s recommendation, albeit he was capturing live TV and not VHS.

I also chose EasyCAP, for which I paid $10 and the pack included the USB dongle, a USB extension cable, a mini-CD with Honestech capture software and drivers, and what passed as an instruction manual. Windows 10 immediately recognised the dongle as an audio device, but to get it recognised as a video capture device, I replaced the crappy USB extension cable with a quality one of my own. Believe me, cheap and nasty cables are more trouble than they’re worth, so throw them away. The same can be said for most bundled software. 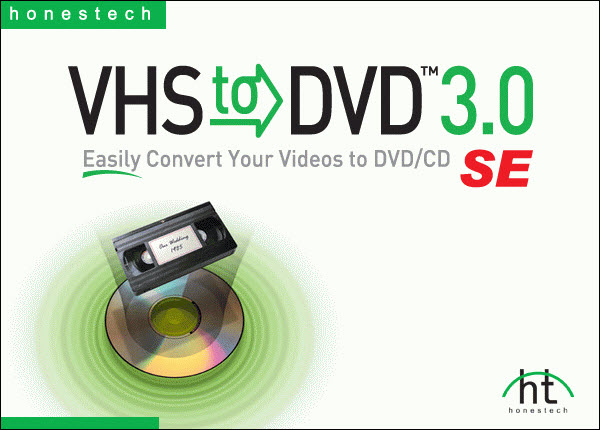 The Honestech (where do they find these names?) VHS to DVD 3.0 SE is basic to say the very least and one gets the impression that it was knocked together rather hurriedly in some sweatshop in Taiwan with a dodgy copy of Windows 95. It also didn’t help that I wasn’t able to get any video preview, so I cast it aside and began searching for something that worked. Windows Movie Maker wouldn’t recognise the dongle, VirtualDub was just too complicated and VLC put out some awful video, so quite by chance, I happened upon Golden Videos VHS to DVD Converter from NCH Software and downloaded a free trial. 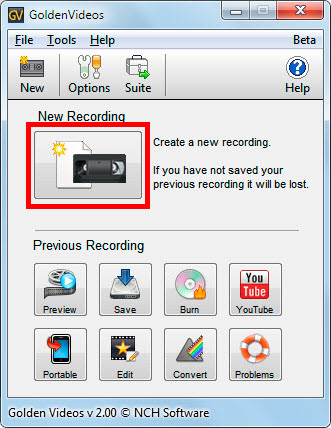 Again, I’m not sure how developers come up with naming conventions for software, but that aside, this program really does exactly what it promises. The opening dialogue couldn’t be simpler and when you hit New Recording, you’re taken to the next dialogue in the wizard where your VCR should be picked up through your capture device– not forgetting to first switch on the VCR and connect the dongle and cables accordingly. 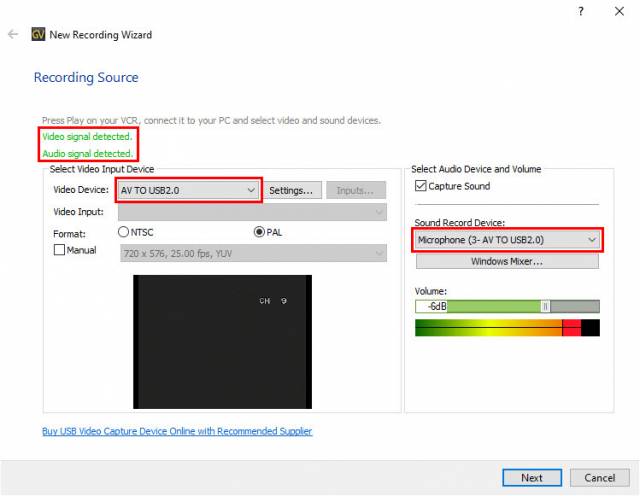 Where I’ve marked the red boxes in the above picture, it’s important to set the correct video and audio devices and also to check the sound capture box. The preview box will reassure you that a video signal is coming through, so you can proceed to the next step. 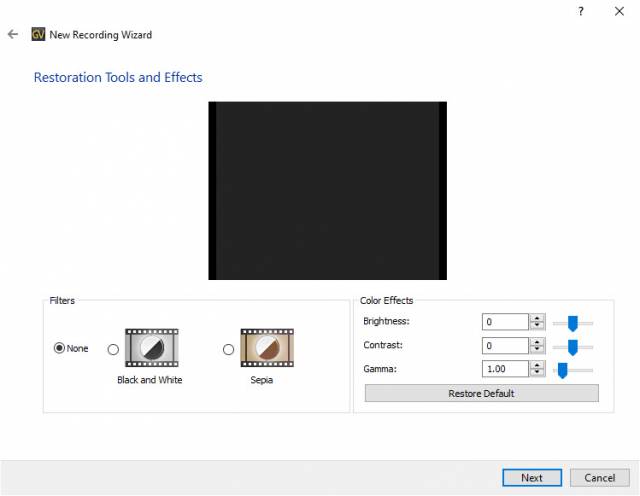 I decided not to use any filters and left all the colour effects at default. 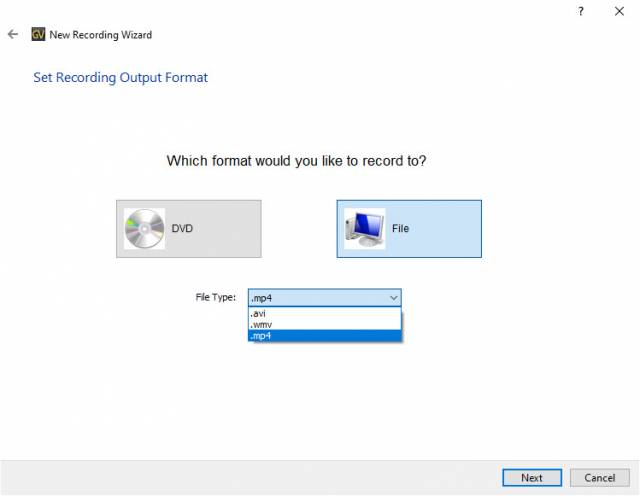 This next step is very important and allows you to choose how to save your video. I chose File as I don’t use DVDs anymore and selected .mp4 as the file type because it’s the most widely used format (container) today. It’s not advisable to choose .avi, as the output file size will end up as humongous. For instance, a three-minute video captured as .avi is around 3.5GB, as it’s a raw file without compression. 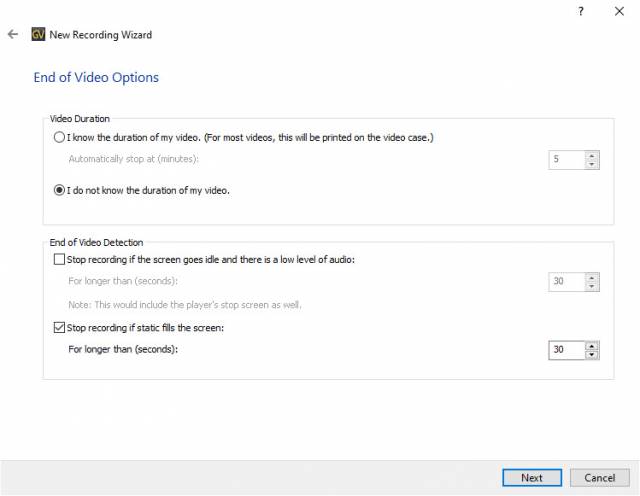 The trial version of Golden Videos only allows a five minute clip to be recorded, but notwithstanding that, it’s best to choose I do not know the duration of my video and also to uncheck both of the options in the section for End of Video Detection, because you need as much control as possible over the capture process. This is particularly important for the static (snow) element because if it’s a long video, you don’t want to be staring at the screen for hours on end. Fortunately, this software has considered most eventualities and provides plenty of options for unattended operation. 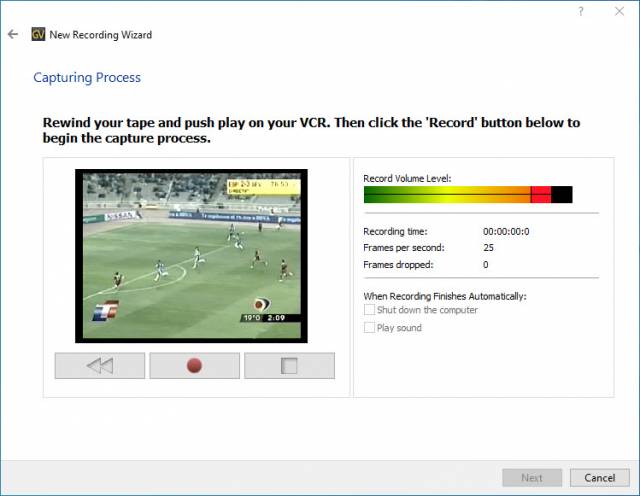 When you’ve lined up the section of VHS you wish to record, press the red record button and the process begins. You can choose to shut the computer down or play a sound when the recording has finished and although those are nice little touches, I didn’t select those. 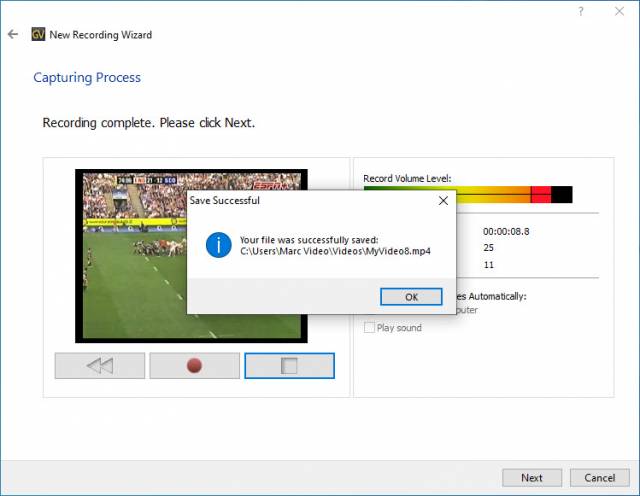 At the end of the recording process, you’re asked where to save the video and surprisingly, the entire rendering process is very fast indeed. I’m not sure if the video is rendered on the fly, so to speak, because in other programs it takes much longer. The files size isn’t too bad either, since a one hour and 20-minute video I recorded, ended up as 1.5GB at 720 x 576 pixels. This can always be rendered down a little further with no loss of quality when run through a video converter, such as WinX HD.

I’ve been messing around with VHS conversion for years now and making do with old hardware and free software like Windows Movie Maker, suffering the inevitable crashes in Windows XP, not to mention dead TV tuner cards. Having used Golden Videos for a couple of days now, it was enough for me to decide to buy it for $25, thus unlocking the five-minute recording limit. Combined with the EasyCap USB dongle and Windows 10, this software is very well designed, extremely user-friendly and doesn’t overload the user with endless jargon and complicated options. The wizard has been very well thought out and takes the user step by step through the entire process. If you need to convert VHS video to digital, I can’t recommend this program highly enough. It really is that good.