As more and more developers turn to the bundling of extras as a source of additional income, it is becoming ever more apparent that the days of downloading freeware and only getting what one ordered may be nearing an end.

The most prevalent bundled extra over the past few years has definitely been the Ask Toolbar, which has been marketed very aggressively. Some larger publishing houses have also chosen to bundle the Ask Toolbar with their reputable software; one of the most notable being Foxit, who began bundling it with their free PDF Reader about 3 years ago. At first they utilized a simple opt-out/opt-in system where, if the end user declined, the main program would just install as per normal anyway. Later on however, in an obvious attempt to lure more people into accepting the bundled offering, if the user declined to install the Ask Toolbar, several native features were then automatically disabled. It was at that time I decided to drop the free Foxit PDF Reader altogether and look elsewhere.

Reports are now circulating that the upcoming new version of the very well regarded AntiVir Free Anti-virus from Avira will also come down with the Ask Toolbar bundled. Apparently, an option to decline will be included but if one decides against installing the toolbar, access to the native Webguard component will then be disabled. So, in order to take advantage of the extra protection afforded by Webguard, one must install the toolbar. This excerpt from an article dated 28th June:

German security specialist Avira today announced that its WebGuard browsing protection tool will now be available to all AntiVir Personal Free Antivirus users, as a part of its Service Pack 2 Upgrade.

Good news, then. Or at least it should be – but the full story is a little more complicated.

Install the optional WebGuard and you’ll also get the Avira SearchFree toolbar, which is essentially the Ask toolbar with Avira-related status information. You can uninstall this from Control Panel like any other application, but that will disable WebGuard, too: you need to keep the toolbar if you want the browsing protection.

In my opinion, this ‘install it or else’ approach is rather heavy-handed, and a somewhat worrying manifestation.

Now we have the latest bundling phenomenon, OpenCandy, infiltrating the freeware ranks at a truly alarming rate. I guess one can’t really blame those freeware developers, who are struggling to make ends meet, for adopting a platform which has the potential to afford some financial relief. In the end, if that is what it takes to maintain the freeware status, then it has to be a better option than no free product at all.

There are a few misconceptions pertaining to OpenCandy, here are some facts which, hopefully, will help clarify the situation and make for a better understanding of exactly what it is and what it does:

Just one example I have come across recently is a freeware program named Driver Sweeper. Here is the part in their EULA which covers OpenCandy: 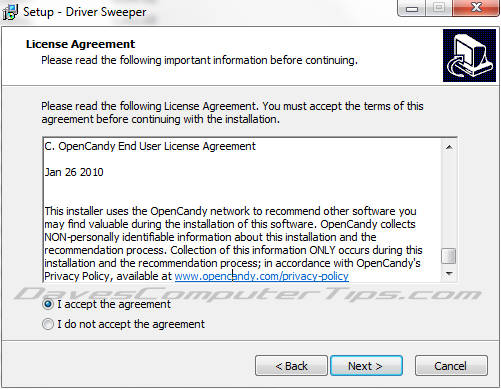 This is the ‘recommendations’ screen during install – note how it is made to appear as though the recommendation is coming from Driver Sweeper, no mention of OpenCandy at all: 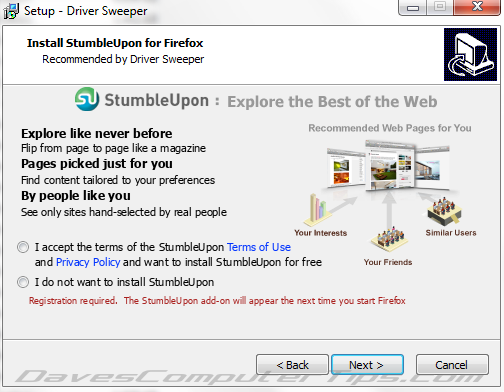 The way I see it: OpenCandy itself, in its current form, is quite harmless but there should be a distinct onus on the developers who utilise the OpenCandy platform to do so in a completely overt and transparent manner.

It is my understanding that OpenCandy’s current minimum requirements, for developers who adopt the platform, is they must include notice of the bundling in their end-user license agreement. In my humble opinion, that just isn’t good enough. Let’s face it, who actually reads right through each EULA?

I believe everyone would be better served all round if the bundling of OpenCandy were to be clearly identified on the product home page and on the download page…in addition to including that information in the EULA.

Bear in mind too that although the OpenCandy people are asking developers to include the information in their UELA, there is no guarantee all will necessarily comply. If you really want to be certain your freeware download does not include OpenCandy here are a couple of suggestions:

Transparency and clear-cut options to decline, they are key. As long as developers stick to those two principles I cannot see any real harm in the bundling of extras, especially if it all helps keep our favorite titles available for free.

One thing is for certain, bundling is now a fact of freeware life and looks certain to continue proliferating. Regardless of how much you may detest the practice, at the end of the day it is you, the consumer, who holds the ultimate choice; to avoid those freeware products altogether. However, my guess would be, if you choose that path, your options are eventually going to be severely limited.

What do you think? Let us know, you can have your say on the DCT Forum HERE

5 thoughts on “Freeware and the bundling of extras”