It’s been 10 years since Facebook presented the world with a mechanism for sharing everything with everyone, and it’s taken all those 10 long years for Facebook to finally realize that, as far as privacy goes, it’s better to err on the side of caution.

In a newsroom post late last week, the social media giant announced that Public sharing will now be opt-in rather than opt-out:

When new people join Facebook, the default audience of their first post will be set to Friends. Previously, for most people, it was set to Public.

The announcement also finally acknowledges that not everyone is completely clear on the concept of sharing:

We recognize that it is much worse for someone to accidentally share with everyone when they actually meant to share just with friends, compared with the reverse.

Another important new feature will present users with a pop-up warning when they are about to share something publicly, just as an extra precaution against inadvertent over-sharing.

Additional new privacy features will also be rolled out over the next few weeks which Facebook says will give all users more tools, reminders, and privacy checkups to help walk them through and adjust their privacy settings. So, you can expect to see more instances of the little blue Facebook privacy dinosaur popping up on your profile.

Over the next few weeks, we’ll start rolling out a new and expanded privacy checkup tool, which will take people through a few steps to review things like who they’re posting to, which apps they use, and the privacy of key pieces of information on their profile. 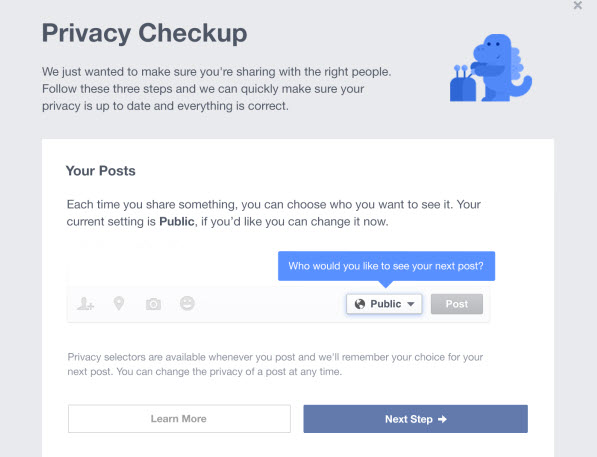 Facebook is also changing the design of its web interface and iPhone app to make the privacy setting more visible at the top of the status update window for each post.

On Facebook for iPhone, the audience you’re sharing a post with is now at the top of the screen, and on web, people will see a simplified audience selector. We’re testing and rolling out similar improvements in other places people use Facebook. 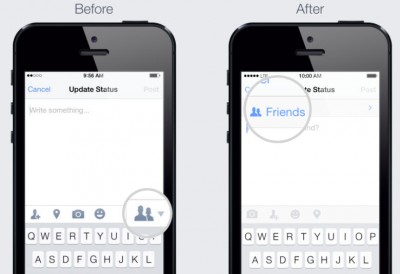 I guess it could be viewed as a classic case of better late than never!