Etiquette on the Internet (Netiquette)

If you are reading this, you are one of many millions that read blogs and forums online and there is a good chance that like others, you respond to what you read. In this group I am including, Twitter, Facebook and other social media.

Interacting online has opened the door for many people to express themselves to others. That is why people, like me, write online. Being able to share your ideas, thoughts and feelings to others is something we have always done but doing so on the web allows us to reach a much larger group of people than ever before. This sharing of ideas to larger audiences is one of the best things about the web.

There are individuals who are happy to show you how to bake bread, fix the shocks in your car or tell you how to install new memory in your computer. How cool is that? Name it and someone is ready to help. Most likely what you want to know is already posted somewhere on the web, just waiting for you discover it.

The web also offers anonymity to many people. This can be and often is a good thing. Shy individuals don’t have to be intimidated by asking for help. In the real world they might not take the chance of exposing themselves to ridicule if the question was deemed “not too bright”. Enthusiasts can find like minded people to share and gain knowledge on an almost endless list of topics. All of this communication is, in my opinion, a very good thing. But…

Yes, there seems to always be a “but”. In this case, it is the dark side of this anonymity.

It is hard to pinpoint exactly, other than being able to hide behind a firewall, why individuals would act as badly as I have seen on the web. This anonymity offered by the internet appears to embolden many of us to say things we would never say in a face to face situation.

When was the last time you talked to a person face to face and said something as mean and mindless as; “if you weren’t such an idiot you would have looked that up on google before saying something so stupid?” My guess is probably never. But remarks like this are all too easy to find in forums, blogs or on the web in general.

Let me first explain that, while not condoning it, there are places where I expect to see, “offensive or inappropriate remarks”. Places like sports 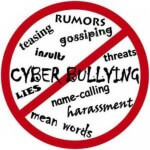 forums are notorious for “trolls”. Trolls are individuals who have no really good reason for being on this team’s site to begin with other than to poke fun, ridicule or try and upset the fans of that particular team’s forum. In the real world I get it. A little cheering for your team and booing for the other is certainly not uncommon. It gets the competitive juices flowing but the point here is a “troll” is not just a fan of another team, they are going out of their way to inject hate into a conversation and that is the theme I see all too often carried throughout the web.

We have all heard of cyberbullying, we even had to create a new name for it. I have read that half of all teens have been exposed to cyberbullying and I don’t doubt it, but I am not just talking about teens I am talking about adults who should know better. I am talking about individuals who would never want to be on the wrong end of this type of bullying but seem to have no problem initiating it.

I read a lot of blogs and forums and I can’t count the number of times I have read comments that elicit a bunch of thoughts in my head like: “what the hell was that”, “where did that come from”, or “why would someone even think it was OK to say that”? But say it they do. In fact, all too many of them seem to get some kind of perverse pleasure belittling others online. The “golden rule” seems to have been lost in some data packets online and I think it is time to bring it back. Let’s face it we are the ones in charge. All we have to do is treat individuals as we want to be treated. It really is as simple as that.

Refuse To Be a Part of It

In general, when we see something in real life that is racist, hateful or stupid we are very probably going to address it by trying to help the abused individual in some way. However, on the web this is not, in my opinion, a good idea. I would recommend 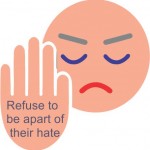 ignoring the offender completely and/or report it to the blog administrator or moderator. They will most likely admonish the individual and even block them from posting.

I would not reply to any comment left by one of these individuals. It only acknowledges that you have read what they had to say and that seems to be one of their main goals.

While we are on the topic of online etiquette, it is time to talk about people with generally good intentions being a pain online. Individuals that treat the rest of the world like a captive audience just because we happen to share time on Facebook or Instagram.

Please, don’t send me a photo of a starving horse commanding that if I really cared about stopping the mistreatment of animals, I would post a “Like” to their photo. I don’t need it. I don’t mistreat animals or in any way condone it but I am not online for you to command.  Don’t send me request to vote on how well you did your farm or that you just won a star for some online game, and for goodness sake, please don’t tell me about your insurance program or other program you are promoting. I am not interested.

Now that I have gotten that off my chest, let me say to those of you who do it. If you have friends that have given you the green light to share this type of stuff, fine. As I mentioned before, communication is a good thing and as long as others share your views I see no problem with it. It is just when it is forced on others just because they are online.

If you have followed any of my posts you probably noticed that my goal is to usually try to teach, fix or expose people to helpful things and I know that I am going slightly away from a strictly electronics approach in this this post. It is just that I believe that bullying is no less a crime just because it is online. Neither for that matter is correcting someone’s grammar or telling someone how stupid their views are.

I mentioned that we, collectively, have the power to put a stop to this rude, inappropriate, or hateful comments. I am not giving a rally cry I am just saying… don’t be a part of it.  Report abuse when you see it and remember you don’t have to carry on a conversation with someone expressing these often vile and extremist views.

3 thoughts on “Does Anonymity Embolden the Trolls?”