I realize there are a number of free adware/toolbar removal tools already available but when a reputable security company such as Bitdefender enters the arena, one has to sit up and take notice.

As far as I can tell, Bitdefender Adware Removal Tool was first released in November last year, at least that’s when it was added into the Major Geeks download listings. Major Geeks lists version 1.1.0 as “Freeware (During beta)“, however, there is no mention of ‘Beta’ on the software’s official home page and, according to Bitdefender, it is definitely free:

The version I downloaded and tested (direct from Bitdefender) is v1.1.2.1610, so Major Geeks is obviously a little behind on this one.

Download consists of a 46.00MB executable, which is slightly larger than I would have anticipated. The tool is portable so it’s just a simple matter of double clicking the downloaded executable to run.

First off, I scanned a clean Windows 8.1 system. That may seem a tad pointless but it provides a guide as to whether or not the software is prone to throw up false positives. The scan took around 6 minutes to completion and, as you can see from the following screenshot, confirmed that the system was adware/toolbar free – and no false positives: 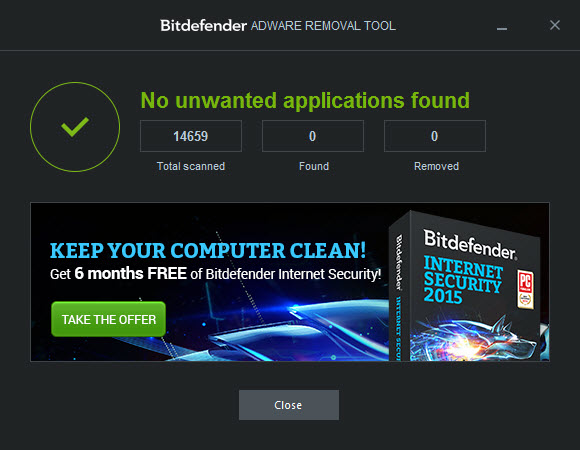 Time now to test Bitdefender Adware Removal Tool properly, on an affected system. So, I downloaded and installed two of the more nefarious scumware toolbars, MyWebSearch and Ask:

Don’t worry, this was all within a virtual machine, so no possible harm could be done. Now scan again and see what Bitdefender Adware Removal Tool finds:

As you can see from the above screenshot, Bitdefender Adware Removal Tool is still reporting a perfectly clean system. What the…

As a means of double checking, plus to prove I wasn’t going batty, I then scanned the exact same system with Malwarebytes Anti-Malware. Because I didn’t have the patience to wait for a full scan to complete, I restricted the scan to those folders I knew would include files relating to the toolbars.

Sure enough, Malwarebytes flagged 8 items associated with the toolbars, even in that restricted scan mode: 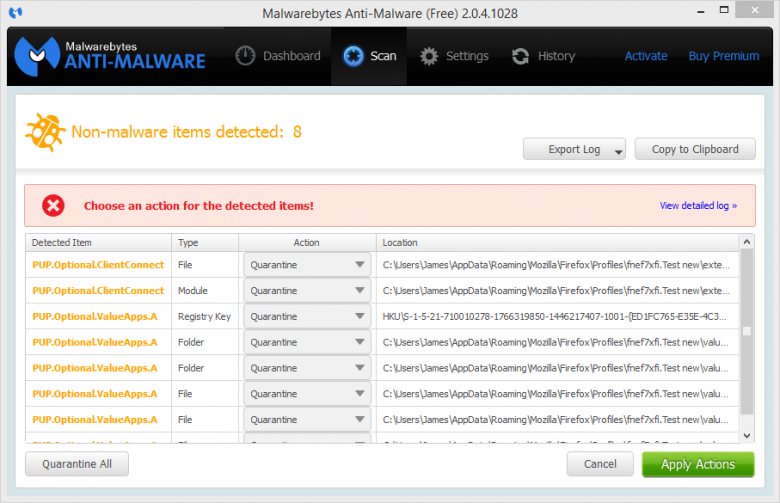 Just to clarify exactly what Bitdefender Adware Removal Tool is supposed to identify and remove, I refer you again to the description from the software’s home page:

Can be summed up in just two words… massive fail!

It’s remarkable to me that a company as reputable as Bitdefender could produce such a seemingly ineffective piece of software, I certainly can’t explain it. Hopefully, a Bitdefender representative might drop by and offer some sort of insight.

10 thoughts on “Bitdefender Adware Removal Tool – Free & Portable, but Does it Work”