With the increasing levels of online surveillance, tracking, geolocation blocking and general interference from governments, VPN (Virtual Private Network) services are becoming more and more popular. The VPN market place is already quite crowded but a comparatively new service provided by the well known Germany based security company Avira piqued my interest. So I decided to take a look.

Avira Phantom VPN is available in both Free and Pro editions with the free edition limited to 500MB data which can be doubled to 1GB via registration. For the purpose of this exercise we’ll be looking at the free version. 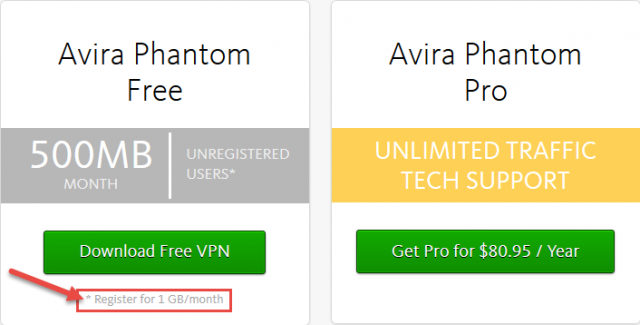 Download consists of a 4.7MB executable which, as one would expect, scans 100% clean through Virus Total. Installation is clean and pretty straightforward, although it does include the Avira management console. The software provides a minimal user interface with limited settings, including options to select a server from a range of countries, turn off diagnostic data collection, start the service with Windows, and (in the Pro version only) secure public Wi-Fi connections. 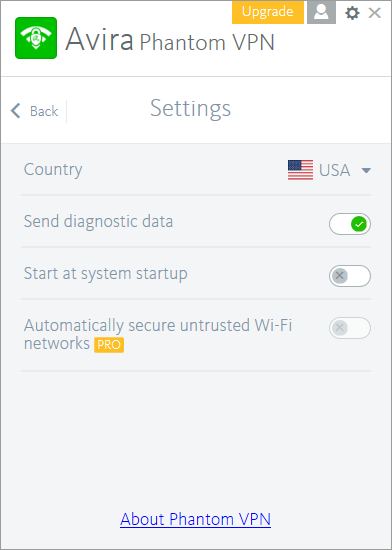 Unfortunately, Avira seems intent on forcing its management console on users and this is installed as part of the deal. Installation places two new icons in the system tray – Avira’s readily recognizable management console icon plus another representing the VPN service. Switching the service on and off is a simple matter of clicking the VPN icon and selecting “Connect” or “Disconnect”, as the case may be. The icon displays red when disconnected and green when connected, which is a nice simple way for users to quickly ascertain the service’s status.

The range of countries to select from is predominantly European, no surprise there seeing how Avira is based in Germany, with the only two non-European options being Canada and the USA.

All VPNs slow down internet speed to some extent and it is just a case of how much, but Avira Phantom VPN does not include a ping test to help users select the server with the lowest latency. This may be fine for users based in Europe where every country is within a relatively close proximity but, for someone such as myself (in Australia), it would have been a very helpful feature. For example: I reviewed Hideaway VPN back in September last year, from the creators of Mailwasher, and it includes a ping test to identify the server with the lowest latency – in other words, the fastest server relative to the user’s specific location.

Anyway, I performed a couple of tests using the Ookla speed test site with the following results:

As you can see from the screenshots, ping latency is pretty high through both external country’s servers and this naturally equates to slower speeds overall. Of course, as I said earlier, this is all relative to each user’s location and the drop in speed will be exaggerated here in Australia due to my specific location. Obviously, for users within a closer locale, especially in and around Europe, any reduction in speed would be far less noticeable.

NOTE: Avira Phantom VPN’s feature list on the home page includes the promise “No logs – Avira does not monitor what websites you visit“.

While 1GB per month for registered users of the free version is obviously not enough to sustain heavy downloading or streaming, it should be quite adequate for an average month of anonymous browsing, and more than enough to test the service if considering purchasing the Pro version. Speaking of the Pro version, when selecting a VPN, the most important aspects are zero logging together with a balance of speed to cost. There’s not much point in purchasing a VPN for privacy which maintains logs of your activity and little point in paying less for a service which is too slow to be used effectively.

There’s a useful run down of VPN services’ logging practices available on the TorrentFreak site here: VPNs and Logging, and, as far as speed is concerned, it really is a case of trying before buying.