Alcatel-Lucent’s security division, Motive Security Labs, has recently reported a 25% increase in mobile infection rates during 2014. The report estimates that 16 million mobile devices have been infected by malware worldwide, but perhaps the most concerning statistic is that Android devices have now caught up with Windows laptops, with infection rates between the two split 50/50 in 2014. 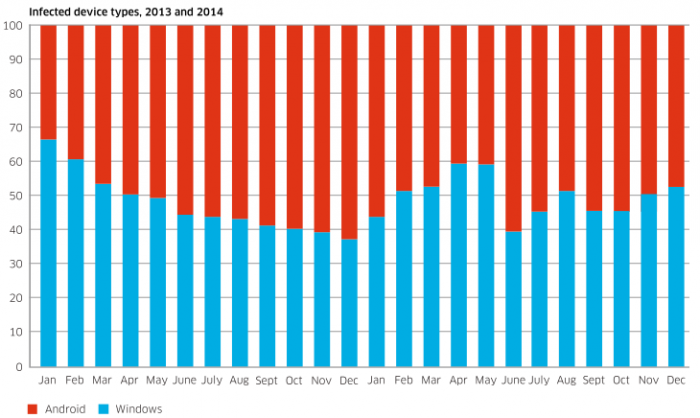 The report notes that the big increase in mobile infections is aided by the fact that a vast majority of mobile device owners do not take proper security precautions, relying on service providers to protect their mobile devices instead.

It also notes that cybercriminals are quick to take advantage of opportunities which are unique to the mobile ecosystem, with 6 of the top 20 most prevalent infections falling into the mobile spyware category. These are apps that are used to spy on the phone’s owner, tracking location as well as monitoring calls and text messages – functions unique to the mobile environment.

The report also includes the following predictions for 2015 (based on 2104 trends):

The report plainly shows that, in this day and age, mobile device users need to be much more security conscious. While most PC users would not think of connecting to the net without some kind of antivirus software installed, unfortunately that is not the case with mobile device users.

2 thoughts on “Android Catches Up to Windows in Infection Rates”