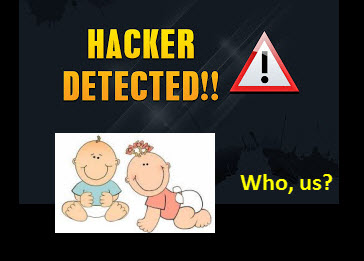 A 12-year-old Canadian boy has pleaded guilty to hacking government and police websites during the student uprising in spring 2012, creating computer havoc and causing $60,000 damage. According to a story published by the Toronto Sun, the boy traded pirated information to Anonymous in exchange for… you guessed it… video games!

The little hacker, who is said to have been involved with computers since the age of nine, contributed to the crash of some sites and accessed information belonging to users and administrators on others. The attacks took a number of sites offline for up to two days, at a cost estimated by Police of $60,000 in damages. A more detailed report is due to be handed over next month when the boy is sentenced.

The Grade 5 student from the Montreal suburb of Notre-Dame- de-Grâce appeared in youth court last Thursday dressed in his school uniform and accompanied by his father. He pleaded guilty to three charges relating to the hacking of websites, including those of Montreal police, the Quebec Institute of Public Health, the Chilean government, and several non-public sites. The court was told that the boy initiated his attacks using several methods:

According to the newspaper report, his defense lawyer told the court that the boy’s actions were not politically motivated:

He saw it as a challenge, he was only 12 years old. There was no political purpose.

They sure start at a young age in Canada – in 2000, a 15-year-old Montreal boy, know as ‘Mafiaboy’, was responsible for an estimated $1.7 billion damage through hacking. He was sentenced to eight months in youth detention and subsequently received several job offers in cybersecurity. Perhaps it’s the cold climate?

It begs the question of how society should best deal with these young offenders. Are serious and personally damaging penalties warranted at such a young age? On the other hand, should they be rewarded for their crimes with job offers? It also makes one wonder about the levels of security adopted by these sites, if a 12 year old can exploit them, just how secure are their security arrangements?