Is It Piracy When They Steal From You? 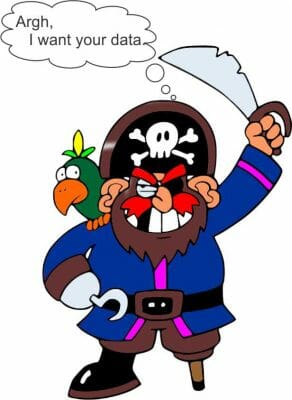 It seems ironic that every software company out there cries about “Software Piracy” and then turns around and steals your personal data. I know that some companies claim transparency but in truth, simple acts like signing your smartphone contract give them access to your personal data.

In a recent article published by Ashampoo, they were surprised that Microsoft Windows was not the biggest collector of your personal data but rather Microsoft Office, Particularly the newest versions. Exactly what data is taken is hard to determine because it is all encrypted.

The EU has been very aggressive in defending the Privacy laws of their individuals. I believe this helps all of us even though the US lags behind. My one bone of contention is they only seem to sue the big boys like Google, Microsoft, Facebooks, etc. That obviously provides a bigger payday for them. I have yet to hear of them going after any company that has an annual income of less than billions.

Exactly Who Is Collecting Data

The simple answer is just about everyone. Even privacy-conscious Apple admits to collecting data on users and according to one security firm’s report, over 24,000 Apple Apps collect personal data. We all know that Facebook, Google, Yahoo, and Microsoft do it. Even Linux users are no longer immune. Canonical had decided that it will include data collection tools in the Ubuntu 18.04 installer. As far as phone and computer Apps, let’s face it, we have all seen the list of what an App is going to collect and click on “OK” anyway.

An example is “Norton Safe Web”. If you look at the permissions you agree to, it can make you question their reasons:

On the surface, it appears very intrusive. But is it? Frankly, it is up to the user to decide to either accept or not use the App. I don’t believe they are using this information in a bad way, but honestly, that is just an assumption. I don’t really know.

How Does Data Collection Affect You?

Right now, there appears to be a certain degree of awareness and fear in individuals in just what data is being collected and used against them. In reading the Ashampoo article, it does appear to steer you towards fear rather than explain how we are affected.

So, what exactly do we have to fear?  I really don’t believe that the major players out there are gathering “dirt” to harm us. I am not so sure about the smaller companies. I have no doubt that data collection is profitable and that is why it is done and not to gather private information for some nefarious reason. One major problem is that regardless of the purity of the reason to collect the data, it can be stolen. That is why a certain amount of security and responsibility must be in place before a company should be allowed to collect personal data.

Any data that is collected and compiled in an anonymous way is harmless to us and helpful and profitable to software manufacturers. However, if anyone is collecting my personal data, I want much more transparency on the “what and why” part. Data that just puts you in brackets, like age, salary range, sex, and product purchases are harmless, and I don’t mind them collecting that. However, I am more concerned about how they use it. If the following basic rules are used, I don’t see the harm:

I understand the exception to this is that some governments demand companies maintain records for a period of time. Reasons like terrorists sending messages through social media, Russia and other countries flooding our sites with propaganda, and true hate-related crimes are all good reasons for that. Even that data should only be obtainable through legal warrants.

When we try to push back then the more pop-ups we have to endure. Who has not seen the following lines on a webpage?

I have very mixed feelings about data collection. In most cases, I really don’t care. I know I haven’t done anything wrong and don’t mind honest data-mining tactics used by companies. Obviously, I am assuming they are taking steps to secure the data from being stolen and that they are encrypting the data so that, if stolen, it can’t be used by others.

I do not approve of any data mining that collects personal data other than what is necessary for transactions with a company. It should only be stored for a reasonable time. In no instance should they be allowed to sell it.

Mining data just to turn around and sell that data to someone else should not be allowed unless it is just raw analytics that does not contain names or ways to identify someone.

Finally, I would like to hear your views on data mining. Do you know of someone it has harmed? Are we giving away too much? What can we do to minimize its effect? Do you really read the Privacy policies of every App you use?

8 thoughts on “Your Personal Data Is Being Collected”