Forums can be a great source of information. If you want to know how well a product is doing, if there are any issues and how frequent or severe, just search around associated help forms. A current topic right now is how Windows 8.1 is refusing to upgrade on some Windows 8 machines running older hardware specs. I haven’t personally seen any official or editorial reports as to why this might be, but the forums do end up shedding some light.

Apparently, Microsoft has altered the System Requirements twixt Windows 8 and Windows 8.1 to include an additional item affecting some older CPUs and motherboards:

When you attempt to upgrade to Windows 8.1 on a Windows 8 machine running non-compatible hardware you will receive a “This PC can’t run Windows 8.1” message, similar to the following screenshot: 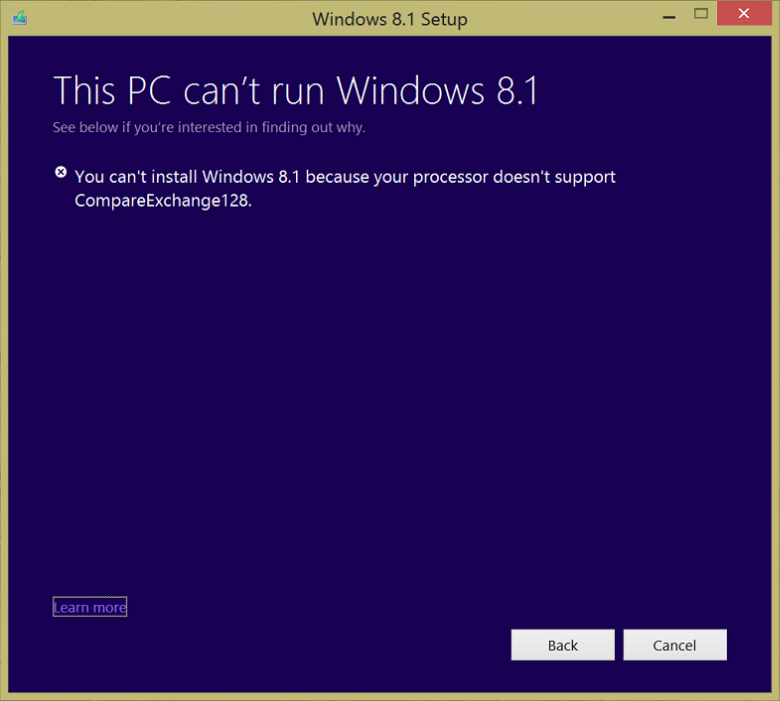 There is no official determination of just how many users might be affected by this issue, nor would it be easy to make one. The consensus is that a very few machines will actually be affected, the number of forum posts reporting this issue suggest that there are at least some who have been affected already. That’s hardly the point though, the real issue here is why did Microsoft change hardware requirements for 8.1 in the first place. If there was going to be a new standard, surely it would have made sense to introduce it in Windows 8 so that any future upgrades would share similar compatibility?

My theory; Microsoft was so keen to see Windows 8 succeed, it held off updating the hardware requirements to ensure that as many people as possible, including those running older machines, upgraded to the new operating system. In other words; it was all about about boosting Windows 8 adoption rate statistics. Now, it seems, Microsoft has thumbed its nose at those users who could run Windows 8 successfully but are now unable take advantage of the free upgrade to 8.1.

I might point out that this affects 64-bit systems only, 32-bit Windows 8 users are unaffected. However, I would hazard a guess that the vast majority of Windows 8 users would indeed be running the 64-bit version. There is also no way that I am aware of to downgrade a system from 64-bit to 32-bit Windows 8.1 – none that is free anyway.

Actually, since starting to research and compile this article, I have just come across a recent editorial on this matter which includes the following quote, purportedly emanating from Microsoft:

This was a change done to improve the security effectiveness of Windows by removing code that cannot use instructions such as CMPXCHG16b. Based on our data, the number of affected processors are extremely small, since this instruction has been supported for greater than 10 years.

I really don’t have a problem with the new requirements or the reasoning behind Microsoft’s decision to introduce them. However, I do have an issue with the timing. It seems rather odd to introduce these requirements in what amounts to a service pack rather than from day one of the operating system.

8 thoughts on “Windows 8.1 Will Not Work On Some Older PCs”