Microsoft has included a system restore function in Windows since Windows ME as a way of providing protection to the important system files of the operating system. How successful this has been in the past is open to discussion, and many will say it has been less than reliable in versions prior to Vista.

Microsoft took a much needed look at the system restore feature while designing Vista and made many changes for the better. Unfortunately they choose to commit 15% of a computer’s storage to System Restore and did not include a method for the user to easily modify any settings related to System Restore. Windows 7 continues with the Shadow Copy storage method introduced in Vista, but changes the disk storage requirements to 300MB as a minimum and 5% of available storage as the default, or 10GB, whichever is less. Windows 7 also adds a very useful way for users to modify settings and interact with System Restore, but before we look at how to change settings we should have a better understanding of the limitations and function of system restore in general.

What does System Restore backup?

System restore in Windows 7 isn’t a catch all backup and should never be relied upon as such. As I stated earlier system restore’s sole purpose is to Windows itself, not your data!

This is Microsoft’s description:

That seems pretty straight forward, but let’s look at what System Restore does protect:

What System Restore does not protect:

Hopefully you can see by the above that System Restore should not be relied upon to safeguard any of your personal data!

When are System Restore Points Created?

If you have ever had the opportunity to restore a system restore point, or found the System Restore applet while poking around, you may have wondered when restore points are created. Looking at the applet it may seem as though the restore points are random, but there is a method to the madness! 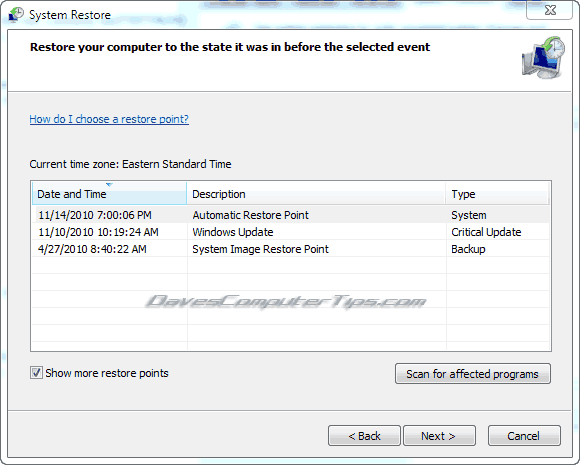 what causes a system restore point to be created?