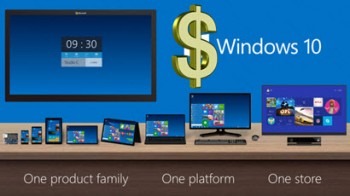 I seriously cannot believe some of Microsoft’s recent decisions – removing basic features such as DVD playback from Windows 10, no longer insisting on an option to disable secure boot, compulsory automatic updates – and now the company has revealed its Windows 10 pricing policy we can also add that to the list.

Yes, Windows 10 will be a free upgrade for eligible users during the initial year following its release but after that, any new users will be required to pay $119.00 for Windows 10 Home and a whopping $199.00 for the Pro edition. And, of course, ineligible users, those who are still running XP or Vista, plus anyone else who wants a copy of Windows 10, will have to pay through the nose. To continue retail sales at such unrealistically high prices appears to be totally at odds with the company’s vision of a service-centric, cloud-connected future for Windows.

This does not make sense on so many levels. I’ve been saying for some time now that Microsoft is keen on getting as many users as possible on the

same platform, this is just fiscal logic, but this decision flies in the face of that premise and is simply not a financially sound one. Revenue derived from retail sales of Windows pales into insignificance when compared to flow-on opportunities, and the market share metric plays a crucial role in how and where developers, advertisers, and consumers invest their resources.

I honestly cannot see a downside to Microsoft making Windows 10 free for any and all consumers who want it, plus there are huge upsides to getting as many people using Windows 10 as possible. In an era where most all major operating systems are free – including OS X, iOS, and Android for existing users, plus untold numbers of Linux distributions – why on earth Microsoft would place a monetary disincentive in the way of people who want Windows 10 is beyond me.

The fact of the matter is that, following the Windows 8 debacle, many traditional Windows users have become disenchanted with Microsoft’s approach – as is clearly suggested by Windows 8/8.1 poor adoption rates:

With substantial numbers of disenchanted users already looking at viable (and free) alternatives, I would have thought it would be in Microsoft’s best interests to try and reverse the trend rather than providing further incentive for even more to possibly join the exodus. Consumers flock to free and increased market share exponentially expands revenue opportunities, these are proven concepts, yet ones which Microsoft apparently fails to grasp.

Message to Microsoft: Forget about expensive retail sales and make Windows 10 free for everyone. Setup a webpage where people can sign up using a Microsoft account (which would entice more people into your ecosystem) to get a free license key and download an ISO. Then sit back and watch in wonder as your new operating system’s market share booms.

25 thoughts on “Windows 10 Pricing Revealed, and it isn’t Pretty”