As soon as companies realized the sheer reach and potential of the world wide web, it quickly became the “in” medium for pushing products and promoting sales. Ads galore – it doesn’t matter what site you visit, you are almost certain to be confronted with ads – some right there in your face, others of the more subtle variety.

No wonder then that millions of users have turned to ad-blocking software to rid themselves of this annoyance and, at the same time, increase their enjoyment of using the Web. BUT, and it is a huge but, is this proliferation of ad-blocking software now itself set to slowly but surely change the inherent nature of the internet via its negative impact on revenue?

The first steps on the road to pay-for-view have already begun with news sites such as The New York Times, The Financial Times, The Wall Street Journal, and The Times all limiting content for non-paying readers. Now, German tabloid “Build.de” is preventing users from even accessing the site if they have ad-blocking software installed and active:

The two alternatives are currently to either disable the ad-blocking software or pay $3.40 per month to access a mostly ad-free version of the site. According to publisher Axel Springer, these measures are necessary for Bild.de to make ends meet:

Our 500 reporters report for you from around the world. To make this possible, we have to rely on advertising revenue.

Your Adblocker locks advertising on BILD.de. But excluding revenue from the sale of advertising space, we can not finance the work of our journalists ~ translation from the Bild.de site.


Make no bones about it, we are not talking pennies here, site owners are taking a huge hit from ad-blocking software – estimated to be around $22 billion worldwide in 2015. Of course, smaller sites such as DCT, which work with smaller overheads, require an exponentially smaller revenue stream. However, it’s all relative and the impact on these sites is felt no less. 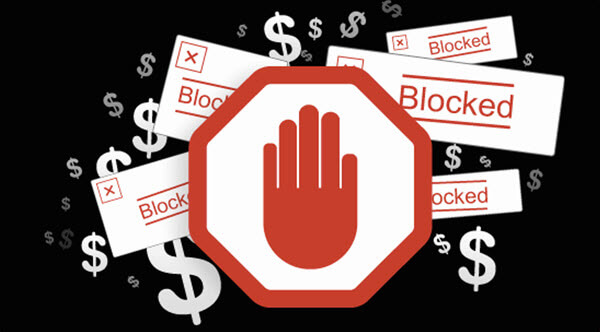 Some might say that, by saturating the net with advertising, site owners have only themselves to blame. However, there are many sites which do not overly use ads and tend to go with less intrusive ads for their purposes. The problem being that most ad-blocking software doesn’t discriminate and simply blocks everything by default. That’s why you’ll often come across pleas, especially from owners of smaller sites, to whitelist their site.

So Who’s to Blame?

At least a proportion of blame must rest on the shoulders of the advertising industry which, through its over zealousness, has tended to abuse the privilege. In fact, Scott Cunningham, senior vice president of technology at the Internet Advertising Bureau and general manager of its Tech Lab, admitted as much in a recent article:

We messed up. As technologists, tasked with delivering content and services to users, we lost track of the user experience. We were so clever and so good at it that we over-engineered the capabilities of the plumbing laid down by, well, ourselves. This steamrolled the users, depleted their devices, and tried their patience.

Mr. Cunningham goes on to express his opinion that “The rise of ad blocking poses a threat to the internet and could potentially drive users to an enclosed platform world dominated by a few companies“. A view with which I totally concur.

In a medium where subscriptions to view online content are far from the norm, ad-blockers and their negative impact on revenue certainly create a catch-22 situation for site owners. At the moment, pay-for-view appears to be limited to a section of the news media, however, if something doesn’t change, I don’t believe it’s unreasonable to assume that more sites will follow suit.

Ultimately, I can see more and more smaller sites closing down and an internet dominated by sites backed by large corporations, defeating the true purpose of the internet in the process.

NOTE: Most ad-blockers do come with a whitelist option, allowing ads to be displayed for a particular site or sites. However, current statistics irrefutably demonstrate that the vast majority of users are not utilizing this feature and just using the software to block everything across the board. I’ve no doubt ad-blockers are here to stay, however, please do utilize the whitelist feature to allow ads for those sites you visit and use regularly.

12 thoughts on “Will Ad Blockers Eventually Lead to a Pay-For-View Internet?”