This article is presented on the basis that the reader is already somewhat familiar with the nature of VPNs and the type of services they provide.

Ascertaining just which VPN service is best, out of the many available, is nigh on mission impossible. Reason being that none of the more popular services offer any sort of free trial period. Some offer a 7 or 30 day refund if not completely satisfied, however, during my research, I’ve read plenty of user reports claiming that this refund process can be extremely problematic.

In an area which epitomizes the “try before you buy” dictate, this lack of free trials is extremely disappointing. Apparently, the only way to test these VPN services is to purchase a minimum plan, usually one month, and then decide at the end of that period whether you wish to continue on or not. However, considering there are at least five or six popular VPNs to choose from, plus the fact that these monthly plans are by far the least economical, testing and comparing all potential contenders prior to making any long term decision could easily turn into an extended and quite costly exercise. What follows then is a general guide to hopefully help you choose a VPN which is right for you.

1) ZERO LOGGING: This is absolutely one of the most important aspects of a VPN service. If your VPN is maintaining any sort of personally identifiable records, your privacy/anonymity is seriously compromised. Put simply, it all but defeats the purpose of using a VPN in the first place and you may as well just stick to connecting through your ISP.

Fortunately, most of the more popular VPNs employ a zero logging policy. However, if you are uncertain or just want to double check, Torrent Freak maintains a very useful reference of VPNs and their logging policies here: Which VPN Services Keep You Anonymous

2) DNS LEAK PROTECTION: Most would be aware that VPNs obfuscate a user’s real IP address but another important consideration that you may not be aware of is the DNS address. If the DNS address is associated with your ISP when connected through a VPN, your privacy/anonymity is at serious risk. You need to ensure that the VPN either automatically utilizes its own DNS server or includes an option to enable DNS leak protection in its client software.

3) NETFLIX and TORRENTS: While neither I nor DCT condone piracy in any form, it is a fact of life that many people look at VPNs specifically for circumventing Geo-blocking (Netflix) and hiding their TV show and movie downloading activities (torrents).

The Netflix situation is currently extremely fluid with some established VPNs already blocked through the media streaming service and many others on the radar. Bear in mind that even if a VPN currently claims to allow access to Netflix, this may not necessarily be so. The only way to be 100% sure is to test the VPN through Netflix yourself. Even then, what’s true today may not be so tomorrow.

On the other hand, most VPN services make it quite clear whether or not they support P2P (torrenting). Many do, some do not, and others impose limitations. If this is one of your primary reasons for using a VPN, you need to make sure to choose a service which includes unlimited torrenting.

4) SPEED: All VPNs impact negatively on internet speed to some degree. This is due to a combination of factors including security measures (encryption) and proximity to the VPN’s servers. Ascertaining an accurate level of impact on your internet speed when connecting through a particular VPN can only be achieved by actually testing that VPN’s service firsthand. To cloud the issue further, all VPNs make pretty much the identical claims – we are the fastest, we are the best, we are the most secure, etc, etc. Which brings us right back to that general lack of any “try before you buy” scenario mentioned earlier.

So, How To Decide?

I guess you could go through the protracted and somewhat costly exercise of testing each contender firsthand over the minimum period of one month or, perhaps, do as I did and spend about 3 to 4 weeks researching. I spent countless hours online reading reviews, both editorial and user, with the emphasis on user comments and… ended up going with the least expensive. I guess the scrooge in me won out in the end.

Seriously, it is far from an easy decision. With all the popular VPNs, you can read a positive here and a negative there. However, on the balance of positive reviews and user comments, I decided to go with Private Internet Access (PIA). Sure, I openly admit that the low cost was a definite factor, but hey, if you’re going to take somewhat of a gamble, it may as well be with as little money as possible, right?

I’ve been with PIA now for four months and, as it turns out, I am completely satisfied. I am pretty sure PIA is blocked through Netflix but that’s not something I particularly need or want anyway. PIA does provide DNS leak protection, a kill switch, unlimited P2P, and access to 3000+ servers worldwide: 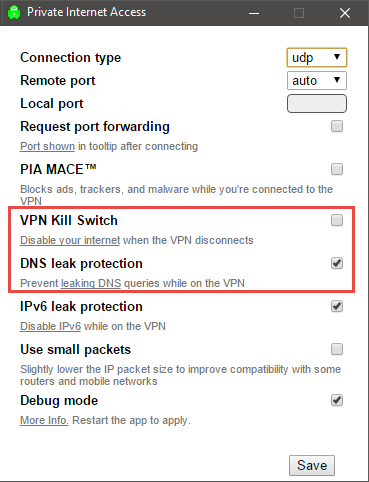 As you can see from the above screenshot, I have not yet enabled the kill switch option. That’s simply because, to date, PIA’s connection has proved to be rock solid. It’s pretty quick too, I can honestly say that I am pleasantly surprised at how little impact connecting though PIA has on my internet speed.

PIA also provides top notch security measures including 2 levels of the very secure AES encryption protocol – bearing in mind that utilizing the higher level of encryption will exponentially slow down your connection:

I apologize for not having the answer to the question posed by the title of this article, but having neither the time nor resources to test each and every VPN contender to its fullest extent, I am sorry to admit that I cannot state definitively which is the best service. I might also point out that, with many individuals seeking a specific feature or features, there is a certain amount of subjectivity involved. However, I hope you’ve learned something about VPNs along the way and, based on firsthand experience, I would definitely recommend PIA – with the one exception, not if you are specifically looking to circumvent Netflix’s Geo-blocking. Then again, in the not too distant future, that may well be the case with all VPNs.

35 thoughts on “What Is The Best VPN”