The game that started it all

In 1993 Doom pretty much took the gaming world by storm, setting the standard for first person shooters and it’s still played today, although I must confess to never having played it yet. id Software followed up with Doom II Hell on Earth in 1994, but we had to wait until 2004 for Doom 3, which is when I finally had a crack at the game. Naturally with any violent video game, it had its retractors and many people seemed more concerned with its demonic references at the time.But heck, how times have have changed, or have they?

Here’s a peek at the original Doom:

When Doom 3 was released in 2004 it  certainly was the best looking game around at the time and whilst it wasn’t wet-your-pants-scary, it carried just the right amount demonic splatter and dark menace, living up to its shooter DNA with no deviations. Since then much has changed at id Software; they are now owned by Bethesda and John Carmack, that legendary programmer, has moved on to pastures new, that is to say Oculus Rift. In the intervening years the rumour mill abounded with stories of a new Doom, dubbed by many as Doom 4. Screenshots appeared and even a  gameplay video after it was announced as being in development way back in 2008. Later, in 2013 to be precise, id Software appear to have canned it, gone back to the drawing board and restarted development from scratch. A teaser trailer was released in 2014 and finally at E3 this year we finally got see that Doom wasn’t actually vaporware, it really exists and Bethesda says we’ll be able to get our eager hands on it in early 2016.

Take a peek at this E3 Doom presentation and tell me you’re not gobsmacked!

Doom is too violent for some people 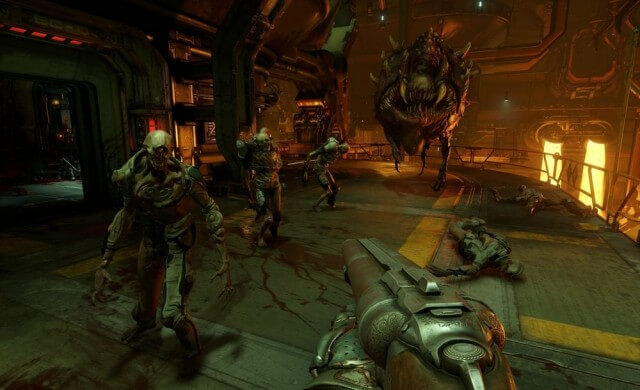 Sometimes one feels like one has to explain certain fundamental facts as if we were all still playing in the school playground. That Feminist Frequency duo of Anita Sarkeesian and Jonathan McIntosh went stratospheric with their indignance over the Doom E3 gameplay trailer shown above and took to Twitter as if their lives depended on venting their self righteous preaching. 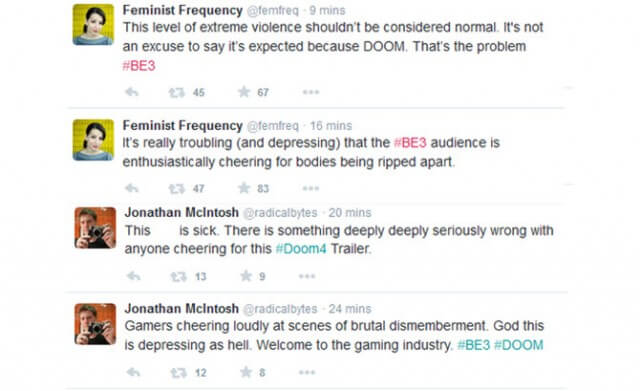 It’s true that the audience was cheering the slicing in half of a demon with a chainsaw, the ripping off of an arm and the dismemberment of numerous creatures from hell during the gameplay because that’s why they queued up to see the presentation in the first place. Those bizarre Twitter comments sink like lead balloons into the abyss of irrelevance when taken in the context of Doom because the game seemingly achieves exactly what it sets out to achieve, no more and no less. And no, there appear to be no female protagonists in Doom, neither are there any large breasted damsels in distress as far as we can see, which is a darn shame. It does beg the question though: if Doom were to feature female characters, how would our feminist publicity seekers wish them to be portrayed? And since Doom falls somewhere between survival horror and classic shooter, would it be more appropriate that our US Marine hero wield a pea shooter and a rolled up copy of The National Enquirer to fend off the demons from hell whilst muttering politically correct platitudes at his attackers? 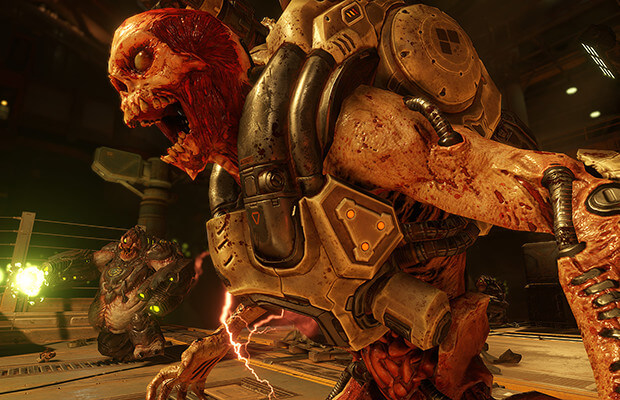 Criticising Doom for being violent is akin to bashing Tarantino films for their bloodlust; it’s a pointless exercise because when gamers buy Doom next year, they expect it to be ultra violent and to pull no punches. It’s the nature of the beast.

At it’s core, SnapMap is about players never running out of fun and imaginative gameplay

Snap Map allows players to ‘snap’ together their own maps by creating rooms and hallways to their own design.You’ll also be able to add floors, ceilings and hazardous materials for that arena style experience, not to mention the placing of demons in all the right places. It’s also said that players will be able to create their own game logic and at the click of a mouse, upload the map and get fragging.

From what I’ve seen of Doom so far, it’s sure to be one of the most eagerly awaited games of the 2015/16 season.

3 thoughts on “The Return of DOOM!”