Here in Indianapolis, the city, the public, and businesses have been gearing up for the Super Bowl for over a year now.  With the big game coming up in just a few days, the city is abuzz with Super Bowl news and talk. Every news story in the papers, on the television, and online finds some way to relate back to the game. Indy is obsessed with everything super. Help me God if I hear one more person tell me to “have a super week.” Negativity aside, I got to go down to all of the festivities in downtown Indianapolis two nights ago and it was a great time. I finished my night at a Buffalo Wings and Rings restaurant where, serendipitously, I got to speak with a guy who’s job it is to prep cities for an influx of visitors requiring increasingly more wireless data and connectivity. For the past five weeks, this At&t employee has been in Indianapolis setting up indoor signal extenders and antennas at hotels, restaurants, and large buildings around the city. I was already planning an article on how wireless carriers were preparing to serve up more signal and mobile bandwith in and around downtown Indianapolis for the Super Bowl, so my conversation with him only fanned the fame and provided a valuable industry insight. 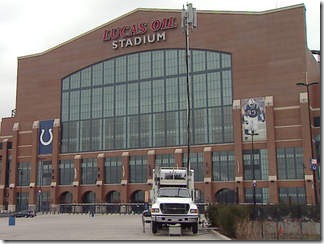 Anyone who’s ever tried to fire up their GPS as a big concert is letting out knows that those precious over-the-air signals our devices require can become very shoddy very quickly if a lot of people expect access at once. I’m sure most of you already know this, but the CDMA, GSM, 3G, and 4G signals our phones and tablets use work like your home wi-fi, in that there is a maximum bandwith any network location can handle at once. If you have some kind of laptop party at your house (Tupperware parties for the New Year!), that 6 Mbps connection that usually keeps two computers very happy and connected will seem like dial-up from the 1800’s when 20 guests all want to use the network simutaneously. The same goes for mobile networks: the total maximum bandwith for the local towers can be spread very thin when 50,000 extra users suddenly request data and voice connectivity over the already-strapped mobile networks and towers. To prevent a major pile-up on the mobile information highway, Verizon, Sprint, and At&t have opted to deploy COWs (Cell towers On Wheels, pictured above), among other technologies, around downtown Indianapolis. Let’s take a look at what each of the carriers is doing to ensure their users have optimum mobile experiences.

In a January 18th press release, Sprint talked of the permanent and temporary adjustments they made to their Indianapolis network.The company has activated five COWs in the weeks leading up to the big game: two at Lucas Oil stadium, two in the Super Bowl village (where fan spend their nights and days leading up to Sunday), and one in southern Indianapolis at the University of Indianapolis—where the New York Giants are holding their practices.The company also had reps and employees expanding the capacity and updating the technologies of close to 100 other access points around the city, including signal extenders and antennas in hotels, shopping centers, and stadiums. Even after the Super Bowl is done and gone, and the COWs go home, the other improvements Sprint is implementing will stick around, which is good for a city that has been begging for 4G (or at the very least enhanced 3G) service from the network for going on 3 years now.

As far as connectivity within Lucas Oil Stadium, Paul Kapustka at Mobile Sports Report describes that Verizon is slated to bring the best, fastest, and most consistent service to its users, when the nearly 65,000 fans fill the seats and press boxes:

For the Super Bowl in Indy’s Lucas Oil Stadium Verizon Wireless has the inside lead, by installing a Distributed Antenna System (DAS), basically a bunch of small cellular antennas hung inside the building to provide better reception. AT&T put a DAS in the Superdome ahead of the BCS championship, and has put DAS installs in other stadiums like Cowboys Stadium in Dallas.

Indianapolis is one of the markets that already features Verizon’s blazing fast 4G LTE coverage. And their enhancements in and around the stadium should help handle the influx of customers clamoring to post tweets and pictures of all of the fun they’re having. Though Verizon is beefing up non-mobile network capabilities in the area as well. The public Wi-fi networks offered at the stadium and the nearby Convention Center (which is hosting the annual NFL Experience) were built and will be maintained by Verizon as well. So thanks to them for that.

If Verizon has the edge in the Stadium and Convention center, I learned from the At&t employee at the restaurant that they will be winning the connectivity wars in the hotels housing the over 100,000 guests for the weekend. He says he’s been in Indy for the past month overseeing and aiding in the installation of antennas and signal boosters in the city. The company has hit over 100 hotels and motels over the past year, and many in the last four weeks. Like Sprint, At&t will also be leaving many of the new installations around the city after the Super Bowl weekend has passed. The Employee explained that At&t would be needing to update their networks in Indianapolis, in preparation for their LTE network rollout, even without the Super Bowl coming to town. This was just a good reason to get it done sooner and quicker. He also described that In these final days leading up to the weekend, the company has put many members of their crew to work preparing all of these hotel networks to also support Verizon’s coverage. For as much as the Wireless Wars seem to be a cut-throat, drag-out brawl, he reminded me of just how much the networks must rely (and thus form contracts with) one another to ensure their own customers have coverage, even where the other guys reign supreme.