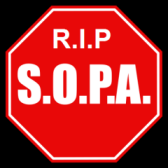 If you haven’t yet heard of SOPA, where the heck have you been hiding! Seriously, SOPA has been headline news for months, the proposed U.S. bill labeled the Stop Online Piracy Act (and shortened to SOPA) was a desperate attempt by the media industry to regulate and control the Internet. Now, largely thanks to universal condemnation of the bill and the chorus of ensuing protests, it appears this dreadful piece of legislation has been withdrawn.

“In a surprise move today, Representative Eric Cantor(R-VA) announced that he will stop all action on SOPA, effectively killing the bill. This move was most likely due to several things. One of those things is that SOPA and PIPA met huge online protest against the bills. Another reason would be that the White House threatened to veto the bill if it had passed.”

As more and more influential voices joined forces with the rank and file and the tide of condemnation welled, so more and more SOPA backers abandoned ship. Apparently, the final straw came when the White House finally decided to oppose SOPA itself, leaving the bill floundering and helpless. If the report is indeed accurate, this is not only a great victory for the power of the people but also, I would like to think, a case of sanity prevailing.

But does this really signal SOPA’s demise? Let us hope SOPA is indeed laid to rest never again to raise its ugly head. My feeling is that we haven’t heard the end of this yet, the media industry is a powerful ally and a major source of political funding. Even if it means a new name and a somewhat diluted blueprint, some form of appeasement is nigh on a certainty at some time down the track – maybe around election time?