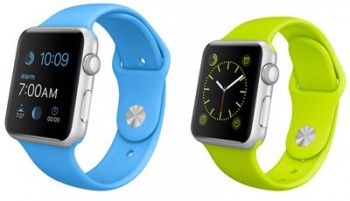 The first ship date is April 24th.  In two hours, that slipped to ‘4 – 6 weeks’. I wasn’t sure what Apple Watch I was getting. By the time I looked at all of the options and submitted my order, 20 minutes had gone by. The ship date was now ‘June.’

I had some concerns about buying a watch for $349 sight unseen so I decided to make a ‘try on’ appointment at the local Apple Store for the next afternoon. I was glad that I did. These are 15-minute appointments where you can try on the different combinations that you are considering.

The Apple Store is always a hopping place but it was crazy busy on Saturday afternoon (April 11th). Two tables have been repurposed for Apple Watch. One is kind of a staging area to get some questions answered while you wait for your appointment. The other is the ‘try on’ table, accommodating six stations. The Apple Store staff was awesome, as always – knowledgeable, friendly and extremely patient.

I was initially torn between Apple Watch Sport and Apple Watch. Apple Watch Sport has an aluminum case with Ion-X glass and a composite back. Apple Watch has a stainless steel case with a sapphire crystal and a ceramic back. Both have Retina Display albeit at different resolutions. The price difference is $200. I haven’t worn a watch in at least ten years so it is kind of hard to justify the additional $200. I tried on both models at the Apple Store as well as a few wristbands.

So here’s what I decided after trying on a few different configurations.

I have an affinity for all things pink so I toyed with the idea of ordering the pink band instead of the black band. But the pink looked pretty hideous online. When I checked it out at the Apple Store, my opinion didn’t change. So I stayed with the black wristband. I can opt for a blue or white one later on for $49 if I get tired of black. There’s also a green band but green isn’t my thing.

While Apple Watch Sport only comes with a fluorelastomer Sport band, you can buy wristbands that are offered with Apple Watch. I tried on the Classic Buckle and the Modern Buckle. While I liked them both, they are (over)priced at $149 and $249 respectively. That’s right. Just the band. No watch. I think that’s too much to pay just for a band so I passed on them. Third-party wristbands are expected to be in abundance once Apple Watch starts to ship so I’ll wait and see.

So, all in all, I’m happy with my Apple Watch order. I ended up making no changes. I’m glad that I did a ‘try on’ appointment though. Now I know I’ll like my Apple Watch Sport when it finally gets here in June.