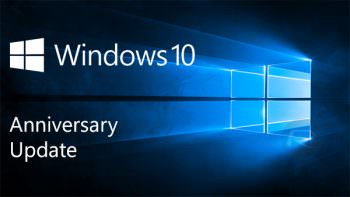 is now available and being pushed to computers through Windows Update. Microsoft has included several new ‘features’ that come with this update. Notable features include a number of User Interface (UI) improvements to the Start Menu, Notification Center, Task Bar, and greater integration of the Windows 10 Virtual Assistant named “Cortana”.

Actually, the term “greater integration” is an understatement. The Anniversary Update replaces the standard search function in Windows 10 with Cortana. Who didn’t see that coming?

This seems a rather bold and brash change that falls right in line with the notion that Microsoft is determined to force everything you do in Windows 10 through their personal data collection filters.

As if forcing Cortana on users of the Windows 10 operating system wasn’t enough, Microsoft adds insult to injury by eliminating the ability to disable it. Once you get Cortana, you can’t get rid of her. Hide her, maybe. But, not get rid of her.

Currently, the option to disable Cortana is found in the Windows 10 Settings menu. With Cortana disabled, the search bar is limited to searching programs, files and folders that are on your computer. If Cortana has not been disabled, then searches will include other things, including the Web, Voice Commands, Notes and Reminders.

With the Windows 10 Anniversary Update, Microsoft says, “… the search box is now Cortana.” So proud of their virtual assistant, Microsoft believes we will all grow to love Cortana’s endearing personality, overlooking the increased access to your private and personal data, including the things you search for online.

For some reason, I’ve seen very little comparison of Microsoft’s aggressive data collecting endeavors to that of Google. It seems that we have become quite jaded to Google’s data collecting via Android, Google Search, Google Docs, Google Photos, and it’s many other Web properties. Until now, Microsoft was somehow the balance between having no online privacy and having at least some online privacy. No more.

You may recall several years ago when Microsoft ran an aggressive advertising campaign to introduce Bing Search to the World. The ad campaign attempted to persuade the public that Bing would produce better search results for the things we search for online. It did little to sway the public, and Microsoft’s search engine gained little from the campaign.

Let’s face it, “bing” just doesn’t roll off the tongue quite like “google.” When you say to someone, “Google it,” they know exactly what you mean. If you say, “Bing it,” it just doesn’t have the same impact. So, Bing will never be a Google. At least, not until it gets a new name.

So, after all Microsoft’s failed efforts to bring Google Search down to size, it appears that Windows 10 was purposely designed to aggressively challenge Google at it’s own game of collecting marketable data about the hundreds of millions of people using Windows in their phones, tablets and personal computers. This was evident with the much maligned built-in telemetry that graces every nook and cranny of Windows 10. It is further confirmed by the fact that Cortana will now replace the standard search, and can not be disabled.

The Writing Is On The Wall

Windows 10 was the first free version ever offered to the public. Google’s Android and Chrome operating systems have always been free, and still are. In fact, Android is the most widely used OS on the planet. It seems that, with the offering of Windows 10 for free, Microsoft is, in some ways, testing the Google model to see if it will work for them.

With the growing popularity of Chromebooks and tablets, and more people using their Android phones in place of a personal computer, how much longer will consumers be willing to pay $120 for Windows? My guess is that Microsoft sees the writing on the wall. In Google’s business model, the OS is free. Being free, it is more widely used. Being more widely used gives Google more access to more people’s personal data. To compete, Microsoft must follow Google’s current business model, or come up with a better one If Microsoft has a better business model, I haven’t seen it in their current tactics.

It’s no secret that the goose laying Google’s golden egg is the Google Search engine. It is the richest goose that has ever flown the World Wide Web. In order for Microsoft to compete effectively for their fair share of the search engine golden egg pie, they have no real choice but to remove Google as an option for Web searches and force Cortana and Bing Search on Windows 10 users. That’s just what they are doing. The Windows 10 Anniversary Update is mandatory. If you haven’t gotten it already, you will.

If you have the patience and determination to avoid Cortana and don’t mind navigating the maze of settings to get there, you will still be able to hide Cortana or limit the information it has access to. Users will have the option to opt-out of Cortana’s personalized services. You can hide the search box in the task bar and instead make an alternative search site, like duckduckgo.com, the home page for your browser. Duckduckgo.com uses the Bing search engine, but protects your privacy and doesn’t produce “bubbled” results, the way Google does.

Windows 10 users can tell Cortana, to “Stop getting to know me,” which prevents her from ‘learning’ your typing inputs. That setting can be found at Start > Settings > Privacy > Speech > Inking & Typing.

Someone said, if you don’t protect your right to privacy, you don’t deserve any. Do you think the deeper integration of Cortana gives Microsoft greater ability to collect more data about you, what you do on your computer and online? Do you use Cortana in Windows 10?

27 thoughts on “Microsoft Forces Cortana – The Gloves Are Off”